Clashes on the Gaza border on Friday
Photo: AFP 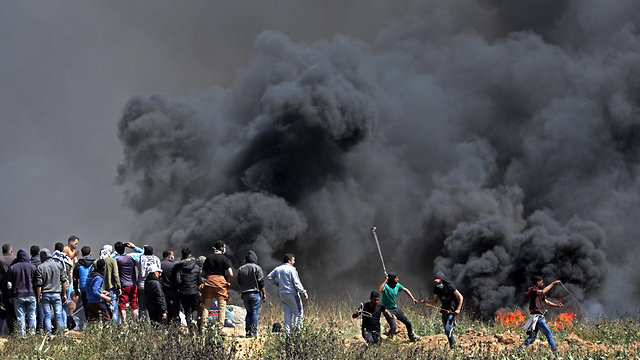 Russia: Israeli use of force against Palestinians 'unacceptable'

After Moscow accused Israel of airstrike on Syrian base, Russian Foreign Ministry also criticizes what it describes as 'indiscriminate use of force against the civilian population' on the Gaza border.

Russia's Foreign Ministry said on Monday that the IDF's use of force against Palestinians at protests inside the Gaza Strip was unacceptable. Palestinian demonstrations, which began on March 30, have been dubbed "The Great March of Return" of refugees and their descendants to ancestral homes now in Israel.

In a statement, the Russian Foreign Ministry criticized what it described as Israel's "indiscriminate use of force against the civilian population."

Clashes on the Gaza border on Friday (Photo: EPA)

Earlier Monday, Russian Foreign Minister Sergei Lavrov dubbed an air strike on a Syrian base in Syria, which Moscow attributed to Israel, "a dangerous development," stressing he hopes the US "understands" this, according to Russian news agency Interfax.

He then added there is no need to open an investigation in order to ascertain who is responsible for the attack, which the Syrian Observatory for Human Rights said killed at least 14 people. The Iranian Fars News Agency reported that at least three were Iranian military servicemen.

Israel has not yet confirmed nor denied it mounted the attack.

Dmitry Peskov, spokesman for President Vladimir Putin, told reporters on Monday that Israel had not spoken to the president ahead of the air strike even though there may have been Russian military advisers at the base, which he described as "a cause for concern for us."

In an unusual statement, the Russian military said that two Israeli war planes carried out the attack from Lebanese airspace with eight missiles, five of which it said that the Syrian air defense system had shot down.

Nine Palestinians were killed over the past weekend, including a journalist, in what was dubbed the "Friday of the Tires." The protests on the Gaza border began in the late morning hours on Friday and increased after noon prayers. Palestinians set fire to hundreds of tires, creating thick smoke over friction points in an effort to blind IDF snipers. The clashes continued until nightfall.