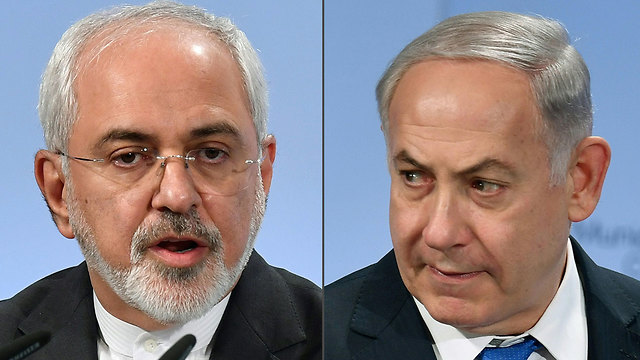 Iran's Foreign Minister Mohammad Javad Zarif ridiculed Prime Minister Benjamin Netanyahu as “the boy who can’t stop crying wolf” on Monday, ahead of a speech the Israeli premier is set to deliver on a "significant development regarding the nuclear agreement with Iran." Netanyahu will deliver a speech at 8pm (local time), according to a statement by the Prime Minister’s Office. No more details were given of the announcement, which will be made from the Kiryah military headquarters in Tel Aviv.

Iranian Foreign Minister Mohammad Javad Zarif and PM Netanyahu (Photo: AFP)
Mocking Netanyahu on his Twitter account ahead of the speech, Zarif wrote: BREAKING: The boy who can't stop crying wolf is at it again. Undeterred by cartoon fiasco at UNGA. You can only fool some of the people so many times.” Accompanying the tweet was a picture that was presented by Netanyahu to the gathering of the United Nations General Assembly in 2012 which depicted a bomb and the various stages allegedly being pursued by Tehran in its quest to develop nuclear weapons.

BREAKING: The boy who can't stop crying wolf is at it again. Undeterred by cartoon fiasco at UNGA. You can only fool some of the people so many times. pic.twitter.com/W7saODfZDK

The derision by a top Iranian diplomat was the second of the day, after Iran's Supreme Leader Ayatollah Ali Khamenei said earlier that the time when Iran's enemies can "hit and run" is over. "They know if they enter military conflict with Iran, they will be hit multiple times," he said in comments during a meeting with workers, according to his website. He did not specifically refer to the latest attack in Syria, which claimed the lives of at least 26 people—most of whom were Iranians.

Netanyahu spoke by phone with US President Donald Trump over the weekend about Iran, according to the White House.

A statement on Sunday said: "The two leaders discussed the continuing threats and challenges facing the Middle East region, especially the problems posed by the Iranian regime's destabilizing activities."