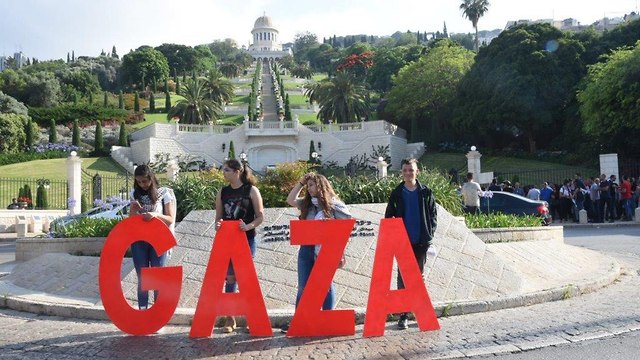 Jafar Farah, who accused a police officer of breaking his leg while he was in detention, joins 200 others in Haifa's German Colony for protest in solidarity with Gaza.

Human rights activist Jafar Farah, who accused a police officer of breaking his leg in a demonstration two weeks ago, returned to protest in solidarity with Gaza residents on Friday. Some 200 protesters at the German Colony in Haifa waved Palestinian flags and held up signs that said "We're against the occupation" and "from Haifa to Gaza."

The demonstration, organized by the Hadash party, took place while Palestinians protested on the Gaza border under the tagline "Friday from Haifa to Gaza."

"I won't be able to walk too much in my condition, but I want people to see they didn't break us," said Farah, the director of the Mossawa Center. "There's a message here: you can't suppress a different opinion, and I won't aid this suppression."

Farah, who was arrested along with 20 others, claimed a police officer broke his leg while he was in detention, which led to his hospitalization.

Earlier this week, police decided to put the officer suspected of assaulting Farah on forced leave. Police said they would consider "taking administrative and/or disciplinary actions" in accordance with the findings of the Police Investigations Unit's probe.

Among the protesters was also the head of the Joint List MK Ayman Odeh and former MK Mohammad Barakeh, the head of the High Follow-Up Committee for Arab Citizens of Israel.

The protest had a permit from police and did not lead to any violent incidents. An additional protest is planned for 9pm Friday whose organizers did not receive a permit.

The Haifa Police called on Arab leaders to work to calm the tensions in the city and warned protesters "not to be dragged after lawbreaking radicals."