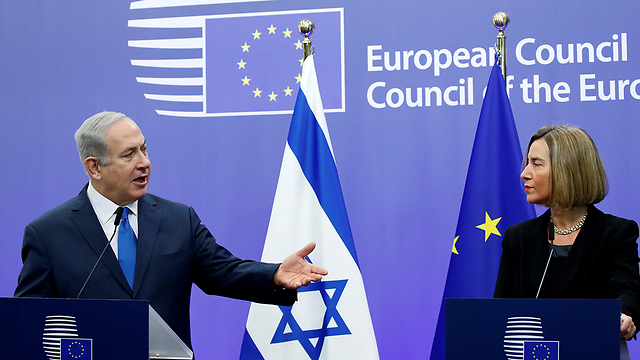 Mogherini cancels trip to Israel after the prime minister declined meeting with her; 'She was invited by the American Jewish Committee for their conference and not by Israel,' Israeli official says, adding 'Mogherini's positions are very hostile towards Israel.'

European Foreign Policy Chief Federica Mogherini has cancelled her visit to Israel, which was set to take place on Sunday, after Prime Minister Benjamin Netanyahu refused to meet with her.

"She was invited by the American Jewish Committee for their conference and not by Israel," said a diplomatic official. "Mogherini's positions are very hostile towards Israel."

A statement from Mogherini's office said she was traveling to Jordan this weekend and sought to add a stop in Israel to her trip. "We had looked into the possibility of expanding this visit to Jerusalem, where she was invited to speak at the American Jewish Committee. For agenda reasons, it turned out that this was not possible," the statement said.

"We believe that is important to talk, because there are many important issues in the region to discuss, including Iran. The HRVP is looking forward to returning to the region in the near future,” Mogherini's office added.

Israel and the European Union are at odds over two main issues: the EU's support of the Iran deal, which Israel seeks to have cancelled or renegotiated, and the US recognition of Jerusalem as Israel's capital and the move of several embassies to the holy city.

On this backdrop, the EU objected to having its ambassadors attend a reception held by Israel's Ministry of Foreign Affairs to the American delegation that visited Israel last month for the US Embassy opening in Jerusalem. The EU also often condemns Israeli construction in West Bank settlements, as well as the clashes on the Gaza border. In late April, after Netanyahu presented the world with Iran's secret nuclear archive, obtained by the Mossad in a daring operation, Mogherini said that "Prime Minister Netanyahu has not put into question Iran’s compliance with the JCPOA commitments, meaning post-2015 nuclear commitments." The nuclear deal, she added, "was put in place exactly because there was no trust between the parties; otherwise we would not have required a nuclear deal to be put in place." Despite that, she allowed that there is "need to assess the details" of Netanyahu's presentation.