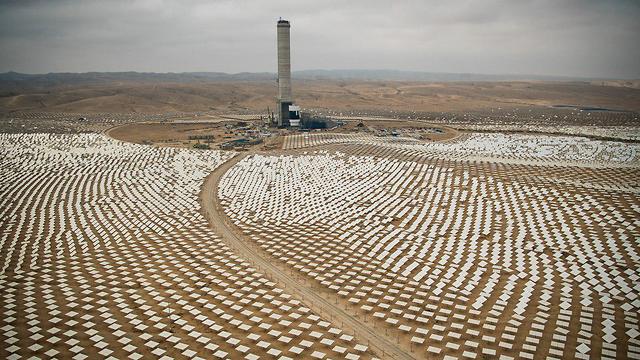 Facility’s construction at the Erez Crossing will be funded by private Israeli and foreign elements; Israeli officials stress plan is a one-sided humanitarian move aimed at easing the crisis in the strip and is not part of an agreement with Hamas.

Images of Gaza’s residents eating to candlelight have become one of the symbols of the humanitarian crisis in the strip, but a new Israeli plan may change that situation.

Israel has approved a plan to build a solar field on Israeli territory to ease the electricity crisis in the Gaza Strip. The construction of the facility at the Erez Crossing will be funded by private Israeli and foreign elements.

Israeli officials stress that this is a one-sided humanitarian move which is not part of an agreement with Hamas.

The field’s construction, and further ideas to improve the humanitarian situation in the Gaza Strip, were discussed in meetings held this week by US President Donald Trump’s envoys to the Middle East, Jason Greenblatt and Jared Kushner. The two met with leaders in the Gulf states, Jordan and Egypt, and held two long meetings with Prime Minister Benjamin Netanyahu over the weekend.

Another idea aimed at easing the humanitarian crisis in Gaza was discussed in meetings between Netanyahu and representatives of the defense establishment: Bringing some 6,000 laborers from Gaza to work in the Gaza vicinity. The idea has been rejected so far at the recommendation of the Shin Bet, citing a serious security threat.

Shin Bet officials believe that a mass entry of several thousand laborers from Gaza into Israel would serve Hamas’ intelligence collection system and would be used to smuggle funds for terrorist activity within and outside the strip.

According to state officials, the idea to build a solar field that would provide electricity to Gaza was raised by Israel in the beginning of 2018 at an international conference on the strip’s reconstruction held in Washington. The original idea was to build the solar fields on Egyptian territory, but the Egyptians made it clear that as long as Gaza wasn’t ruled by the Palestinian Authority, they would not allow the construction of such a project on their territory.

The American administration and the Egyptians agreed that the amount of electricity pumped into the Gaza Strip would be doubled. Today Egypt supplies the strip of 27 megawatt of electricity, and it has agreed to increase the amount to 55 megawatts. In recent weeks, however, the Egyptians completely halted the power supply to the strip, after they said power lines in northern Sinai were vandalized by ISIS operatives.

Since Egypt opened the Rafah Crossing to the strip’s residents in mid May, some 35,000 people have left and entered Gaza through the crossing, easing the sense of a siege in the strip. Meanwhile, Egypt has decided to extend the opening of the crossing by two more months from the end of the month of Ramadan.

A Cypriot government spokesman confirmed on Tuesday that Israel had asked Cyprus to examine the possibility of establishing a shipping point on the island for sending goods to the Gaza Strip. This move also points to the efforts made by Israel and other countries in the region to ease the humanitarian crisis in the strip.

In light of these economic moves, which are based on initiatives of the American administration and UN envoy to the Middle East Nickolay Mladenov, Hamas keeps conveying messages—both to Israel and to Egypt—about its interest in a ceasefire arrangement. One of those messages was an unprecedented post by an associate of the Hamas leader in the strip, Yahya Sinwar, in which he called for a meeting with official Israeli representatives at the Erez Crossing to find a solution for the chaotic economic crisis in the Gaza Strip.

Such an open post by a person associated with the Hamas leader wouldn’t have been published without the approval of the Hamas leadership in the strip. Meanwhile, the defense establishment has detected a considerable drop in the number of incendiary kites and balloons dispatched from Gaza. The kites and balloons are launched by Hamas’ kite unit, and not a single one takes off without the approval of Hamas’ military wing. The drop in the number of kites is therefore seen as another message from Hamas that it has no interest in a comprehensive conflict with Israel.