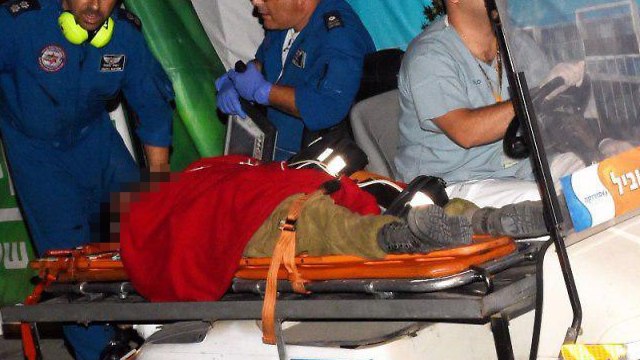 21-year-old Givati soldier from south Israel was first said to be in serious, then light and then moderate but stable condition after sniper opened fire on him in what the IDF has described as a 'trap' terror attack that used children to lure soldiers to within range.

An IDF officer was moderately wounded on Wednesday evening after being shot by a sniper from the Gaza Strip during the most serious outbreak of violence between Israel and the coastal enclave since the two sides reached a ceasefire on Saturday.

The officer from the Givati Brigade was originally said to be in serious condition, but he was later said to be in light condition. Shortly after, doctors said that he was in moderate but stable condition, it was cleared for publication on Wednesday evening after a gag order was initially placed over the incident.

The shooting took place in the Kissufim area just 400 meters away from where IDF soldier Staff Sgt. Aviv Levi was killed by a Palestinian sniper on Friday afternoon on the Gaza border.

After being shot, the officer was evacuated to Soroka University Medical Center in Be’er Sheva and taken to the operating theater suffering from a gunshot wound in the chest and stomach area.

The 21-year-old soldier from Dimona in south Israel recently finished his mandatory service and began his service as a career soldier.

According to an initial investigation, Palestinian terrorists opened fire on IDF troops from the Givati Brigade's Tzabar Infantry Battalion who were conducting routine operations near the border fence when they were called to to disperse a “bait” riot staged by children to lure soldier within the sniper’s range.

The initial investigation found the officer was wearing full protective gear, including ceramic armor and helmet.

IDF investigators are checking whether the sniper who hit the IDF officer Wednesday was the same one who shot Staff Sgt. Aviv Levi five days prior.

The sniper is believed to be a member of one of the smaller factions in Gaza that do not answer to Hamas. However, since Hamas controls the border area, the IDF sees it as responsible for everything that happens there.

Three Palestinians belonging to the Hamas military wing were killed while another Palestinian was critically wounded in a retaliatory IDF attack on seven Hamas outposts along the border.

Also on Wednesday evening, Israeli jets struck a rocket launcher and shelled the area from which two rockets were launched by ISIS and landed in the Kinneret earlier as part of the internal fighting raging in Syria.