Four women, out of the 24 women who were murdered this year 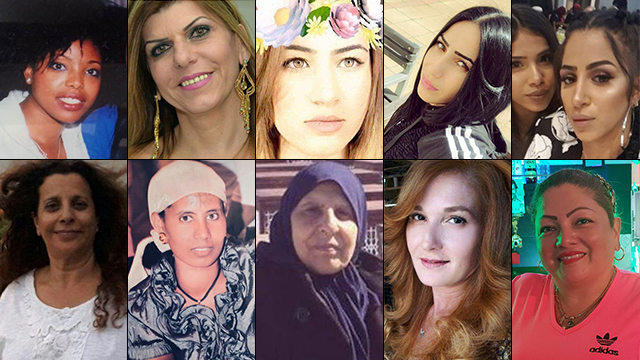 Ahead of the main rally against domestic violence, families of domestic violence speak about the protest; Ortal Shafak, whose mother was murdered by her then-husband: 'we shouldn't have to wait for so many women to die before we wake up.'

Families of domestic violence speak with Ynet about the nationwide strike launched Tuesday in protest of violence against women. While they welcome the recent widespeared interest in the issue, most believes the government hasn’t taken enough action against the phenomena.

"If my mother was alive today, she would have gone to the rally against domestic violence," says Ortal Shafak, the daughter of Aliza Shafak, who was murdered by her husband two months ago in Netanya. "I know that she would have fought for other women. "

24 women have been murdered since the beginning of the year

Shafak was murdered by her then-husband, who had already spent five months in prison for another attack.

The daughter, Ortal, 35, who will speak at the main rally against domestic violence in Tel Aviv Tuesday night, welcomes the protest.

"Unfortunately, it is too late, and we shouldn't have to wait for so many women to die before we wake up. They don't talk about domestic violence enough in schools. There are resources, but not enough, there are no treatments for violent men, and yet it is better late than never," she said.

In the months since the murder of her mother, Ortal had become a mother of sorts to her little brothers and sisters. "This is not a simple time," she says. "I go to work, but I'm not focused, my mind is preoccupied with other things. It's very difficult to function after such a traumatic event," she added.

'Where have you been until now?'

Tamar Ben-David was 19 years old when her father murdered her mother, Avital Rokach, in 2014. Since then, Tamar has participated in domestic violence protests several times. "I will attend the main rally in Tel Aviv," she said. A month ago, her father was convicted by the Jerusalem District Court after a four-year trial.

"I was pleasantly surprised by the protest, my family and I felt that this was a subject that had been swept under the rug for years. I very much hope that the protest against domestic abuse will stay in the headlines, and that we will know how to exploit the momentum, preserve the discourse and turn the subject into something that can no longer be ignored. If everyone understands that this is important, why doesn't the government fund a plan to fight the abuse?" she stressed.

Since the beginning of 2018, 12 Arab women have been murdered in Israel by their spouse or relatives. In Jewish society (about 80% of the population in Israel) 11 women have been murdered by their realtives. Hazad Abu Hamid, a resident of Kasra-Samia village in the north, lost his daughter Wajadan, 16, when a boy stabbed her to death two years ago because she refused to meet with him. Hamid named his newborn daughter after her late sister.

"Nothing has changed since the murder," he said. "54 people from the Arab community have died since the beginning of the year, and the women are the weakest... we go out to the streets and shout out against domestic abuse, but it's not enough. An intervention must be done by the clergy. Demonstrations alone will not suffice. I'm in favor of the strike, but if it does not continue – I don’t think it could stop the violence," he argued.

Last week, two girls were brutally murdered— 16-year-old Yara Ayub from Jish and 13-year-old Eritrean native Silvana Tsegai from Tel Aviv. These two murders, in addition to the 22 additional women murdered since the beginning of the year, where what sparked the women's protest.

"I am happy that there is a strike and demonstrations. My heart is with everyone. I call upon the citizens of the country— men, women and children— to participate in the strike. Violence is a danger to our lives. It must be stopped," Yara's mother told Ynet.