Is there a way out of US-Israel crisis?

Analysis: Israeli and American officials believe next Israeli government's mission will be to restore Bush-Sharon understandings which were violated by Netanyahu government. But is that even possible with the direction Israel's political elite is taking?

"There is a constant structural tension between the United States, the superpower, and the small state of Israel," the man said in English.

"The great America, unlike the small Israel, is operating in a world with wide security margins, which allow it to take military and political risks. Israel is located in a hostile and turbulent environment, which does not allow it to be exposed to risks. This difference is enough to create perceptual tensions.

"Add that to Israeli governments' tendency to spread within Judea and Samaria versus the basic American approach, of both Republican and Democratic administrations, which rejects settlements in the territories as an illegal enterprise.

"And when the leaders of the two countries, Barack Obama and Benjamin Netanyahu, start off the dialogue between them on the wrong foot, the explosion is inevitable."

This was a description of the roots of the rift between the White House in Washington and the Prime Minister's Office in Jerusalem offered by one of the participants in a closed discussion about the future of US-Israel relations.

Another participant reminded the others of previous crises in the relationship between the US and Israel which were considered tragic at the time: President John Kennedy wanted to impose a boycott on Israel over the Dimona nuclear reactor, President Ronald Reagan compared Israel's bombings of Beirut to the Holocaust, and the Israeli intention to sell China the Falcon intelligence-gathering aircraft led to "the deepest" rift in the relations.

"It's easier," the speaker with the diplomatic experience stated, "to explain Israel's policy to the wide American audience than to explain the US policy to the Israeli audience."

Obama's current failure proves it: He is "the least popular American president in Israel." 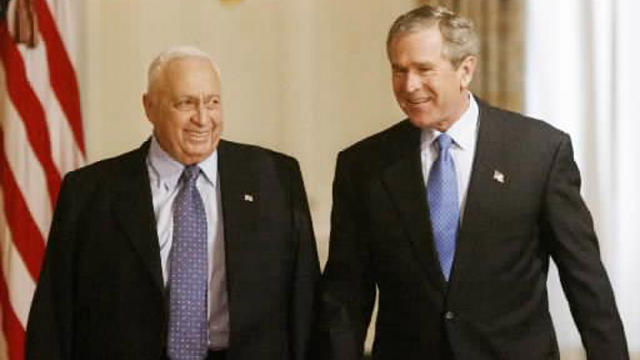 Bush and Sharon. Israel unilaterally cancelled clause talking about a complete construction freeze in all settlements which was included in road map for peace (Photo: Reuters)

The historical comparisons failed to calm down most of those present. Even if the Israeli-American rift is not unprecedented right now, they said, it seems like there is no way out of it.

Its ramifications are terrifying: In the midst of Operation Protective Edge, the administration decided to delay the supply of important weapons to Israel for a while.

US Secretary of State John Kerry referred to Jerusalem's Gilo neighborhood as a "settlement," thereby "cancelling the distinction between Gilo and Yitzhar, which was at the center of President George W. Bush's letter to Prime Minister Ariel Sharon," one of the officials said during the meeting.

President Obama himself used the work "shocking" to describe the Israel Air Force strikes in Gaza, and the stench of the insulting and rude jibe directed at the Israeli prime minister by a senior American official has yet to disappear.

Israel, on its part, unilaterally cancelled the clause talking about a complete construction freeze in all settlements which was included in the road map for peace, a document produced by the Bush administration and approved by the Sharon government.

Obama's statement on renewing diplomatic ties with Cuba was addressed nervously. Just like Obama "reassessed" his attitude towards Cuba, one of the speakers warned, he may reexamine his attitude towards Israel under certain circumstances, but in the opposite direction. And maybe Tehran is next in line after Havana for a reopening of the American embassy?

Maybe. In the meantime, the US and Iran have reached a "temporary armistice agreement on the nuclear issue," said one of the participants who is involved in the issue, "an agreement which actually serves Israel's interests and weakens Iran, both because of the ongoing sanctions and because of the well-times fall in oil prices."

This is the heaviest economic blow the Iranian administration has been dealt, "thanks to a quiet dialogue between Washington and Riyadh."

The meeting's participants agreed that the next Israeli government's mission in terms of Israel-US relations would be "to renew the understandings between Bush and Sharon," which were violated by the outgoing government led by Netanyahu.

Who will succeed in restoring these understandings, with Israel's political elite increasingly turning in the settlement-nationalistic direction and America's elite becoming sick and tired of it? This question remains open.