Netanyahu and Obama. Attaching the West, and the US in particular, contradicts Israel's interest
Photo: AP

Israel's most important strategic interest still lies with US

Analysis: Russia's ambition is to put down roots in Damascus alongside Iran and to restore its image as a key power in the Middle East; Israel must remember that as it prepares to separate itself from Washington.

In the past week, the attention on the Iranian issue focused on the conduct of the United States and Western European countries: At first we followed the political drama in Washington, at the end of which Israeli government spokespeople announced their great success following the compromise imposing procedures which limit US President Barack Obama's authorities in regards to the nuclear agreement's approval, if such an agreement will indeed be reached.

This governmental approach did not change even after Russia declared that it had decided to lift the ban on the sale of S-300 missiles to Iran. The government's spokespeople stressed that this undesirable move was a direct outcome of the "bad agreement" presented by the US. From here on out, the battle against Obama continued in full swing, and the official announcements mentioned a telephone conversation between Prime Minister Benjamin Netanyahu and Russian President Vladimir Putin, in which the Russian move was criticized.

The public statements arrived the next day. Netanyahu, who delivered the keynote address at the Yad Vashem Holocaust remembrance ceremony, dedicated many profound words to the Iranian threat, linked it to the West's conduct on the eve of World War II and prepared the public for a situation in which Israel will be forced to face its fate on its own.

Putin chose to say that his decision was an appropriate one, because the weapons Russia plans to supply Iran with are defensive and do not pose a threat to Israel. He also said, rightfully so, that his move does not violate the international sanctions imposed on Iran, but linked it to what he defined as the flexibility demonstrated by Iran in the negotiations with the world powers, and promised that Russia would continue to cooperate with the other countries in the negotiations with Iran. 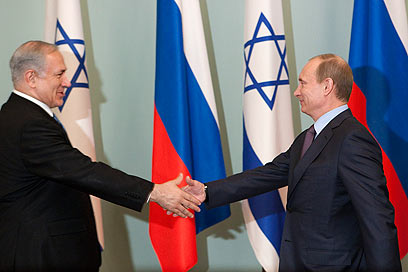 Netanyahu and Putin. Israel must raise its alertness and use discretion vis-à-vis Russia (Photo: EPA)

Additionally, Putin implied that the supply of defensive weapons serves the intention to prevent a deterioration of the Middle East to a wide-scale military battle, and legitimized the Iranian regime.

Obama rushed to respond, saying he was surprised that Putin had held this long in approving the arms sale to Iran, and that it may be necessary to find wordings in the final agreement which would make it easier for the leadership in Tehran to sell the agreement to the public.

All this points to two overall issues requiring our attention. The first is a somewhat surprising attempt between Washington and Moscow to openly cooperate on the Iranian nuclear issue, as opposed to the serious conflicts between them on a variety of international issues – led by the Ukraine crisis. For more than 70 years now, there has been a difficult rivalry taking place in the Middle East between Russia and the US, which reached its climax in the Yom Kippur War when the two world powers toyed with mutual nuclear threats as well. The intra-bloc aspect and its implications on Israel require fundamental clarification in light of these initial signs.

The second overall issue has to do with the Israel-Russia relationship on the bilateral level. In the past few years, Israel has been careful not to offend Russia and its leaders, while Russia has delayed certain weapon shipments both to Iran and to Syria in light of heavy Israeli pressure, which was backed by similar moves from the US.

But this picture is changing before our eyes: The Russian interest to put down roots in Damascus alongside Iran and the Russian ambition to restore its image as a key power in our region – both in the Arabian Peninsula and in Iraq – require Israel not only to raise its alertness and use discretion vis-à-vis Russia, but also to remember that when it considers and implements moves which are interpreted as a preparation for separating itself from Washington.

Therefore, attacking the West, and the US in particular, contradicts Israel's most important strategic interest on the international level.

In the prime minister's historical review of the 1930s on Holocaust Day, he forgot to mention that there was another player in Europe, Russia, which addressed the growing Nazi threat that is compared today to the Iranian danger. Russia didn't try to appease – it signed a pact with Germany.