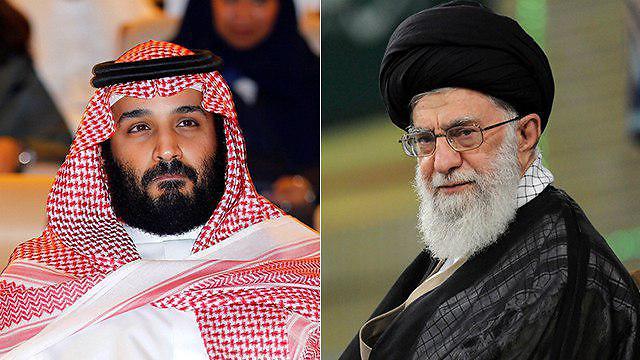 Saudi Prince bin Salman lashes out at Iran's Supreme Leader in NYT interview Thursday, escalating war of words between the rivals; while Iran and Saudi Arabia have repeatedly clashed in int. arena, Israeli-Saudi ties have been on the rise, with Saudi officials recently visiting Paris Grand Synagogue.

Saudi Arabia’s powerful Crown Prince Mohammed bin Salman called the Iran's Supreme Leader Ali Khamenei “the new Hitler of the Middle East” in an interview with the New York Times' Thomas Friedman published on Thursday, in yet another escalation of the relationship between the rival gulf nations.

The Sunni Muslim kingdom of Saudi Arabia and the Shi‘ite theocracy Iran back rival sides in wars and political crises throughout the region.

Bin Salman, who is also Saudi defense minister in the US-allied oil giant kingdom, suggested the Islamic Republic’s alleged expansion under Khamenei needed to be confronted.

“But we learned from Europe that appeasement doesn’t work. We don’t want the new Hitler in Iran to repeat what happened in Europe in the Middle East,” the paper quoted him as saying.

Israel considers Iran to be its utmost threat, with Prime Minister Benjamin Netanyahu repeatedly warning of the Islamic Republic's aim to establish itself in Syria, right on the border with Israel.

Netanyahu voiced this concern to Russian President Vladimir Putin, both in person and in a recent phone conversation, as the Russian leader met with Iranian President Hassan Rouhani and Turkish President Recep Tayyip Erdoğan at his Black Sea resort in the city of Sochi on Wednesday.

Bin Salman also refused to talk about Lebanese Prime Minister Saad al-Hariri, who announced his resignation in Saudi Arabia and returned to Lebanon a few days later, after which his resignation was suspended. He only noted that the bottom line of the Hariri affair is that the Lebanese prime minister will not continue to provide political cover for the Lebanese government, which in actuality is controlled by Hezbollah.

Friedman, a Jewish columnist for the New York Times, wrote that he flew to Riyadh to interview bin Salman, who also goes by MBS. He further wrote that he met bin Salman at Al-Auja Palace, north of Riyadh. Bin Salman spoke to him in English, and alongside him were Prince Khalid bin Salman bin Abdulaziz Al Saud—Saudi Arabia's new ambassador to the United States—as well as other Saudi officials.

In his conversation with Friedman, bin Salman, 32, denied allegations that the arrest of dozens of princes sent to the Ritz Hotel was part of a power struggle. "It's absurd," the crown prince replied, claiming that most of the royal family was already behind him. His stated that Saudi Arabia has suffered a great deal of corruption from the 1980s until today. He added that according to Saudi experts' calculations, about ten percent of all government spending was due to the high levels of corruption, and that over the years the government had launched several fights against corruption, all of which had failed, because they had started from the bottom up.

According to bin Salman, it will be possible to reach agreements with the detainees, who are expected to reimburse the Saudi government with no less than $100 billion.

Friedman stated that the crown prince told him, “Do not write that we are ‘reinterpreting’ Islam—we are ‘restoring’ Islam to its origins—and our biggest tools are the Prophet’s practices and (daily life in—ed) Saudi Arabia before 1979.” Bin Salman stressed that in the time of the Prophet Muhammad, there were theaters, Jews and Christians in Saudi Arabia, and that the country's first judge was a woman. “So the Prophet was not a Muslim?”  asked bin Salman, rhetorically.