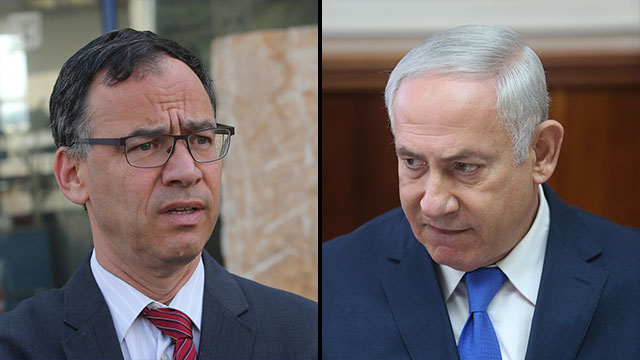 SA Nitzan: 'PM not a suspect in sub. probe as of now'

PM not a suspect in submarine probe as yet but will continue to be questioned 'so long as questions remain,' says SA Nitzan; asked about Molcho continuing to serve as PM's envoy while suspected of involvement in affair, Nitzan remarks, 'Not every investigation justifies resignation'; law enforcement 'terrorized, must be allowed to do its duty,' Nitzan says on recommendations bill.

State Attorney Shay Nitzan was asked on the possibility of Prime Minister Benjamin Netanyahu being questioned on the submarine probe during the Eilat conference on journalism, and replied "The prime minister is not a suspect so far and the public has a right to know that. If that changes, we'll notify the public. If we think the prime minister should provide testimony, he will do so."

Asked about the circumstances permitting attorney Yitzhak Molcho, who is a suspect in the probe, to continue serving as the prime minister's envoy, Nitzan said, "Not every investigation justifies immediate resignation."

"(Molcho) announced his resignation and a petition was made to the High Court, which rejected it. We are, of course, closely monitoring the situation for any changes," Nitzan explained.

SA Nitzan (L) said PM Netanyahu was not yet a suspect in the submarine probe but will be questioned further (Photo: Alex Kolomoisky)
As for progress on Cases 1,000 (relating to illicit gifts the Netanyahu couple allegedly received from businessman Arnon Milchan) and 2,000 (regarding Netanyahu's talks with Yedoith Aharonoth owner and publisher Arnon Mozes), Nitzan said, "There are complex questions of evidence still to be answered here and other moves to carry out. We also need cooperation from foreign authorities. We are, however, at a rather advanced stage. The prime minister was questioned six times and so there are definitely things to ask him about, and he will be questioned further so long as questions remain. "We're at relatively advanced stages and are hard at work. We'll examine the issues when police concludes its investigation. While we think the affairs of a prime minister under suspicion should be examined quickly, it should not come at the expense of professionalism. The two cases are not so simple, neither factually nor as far as evidence is concerned," Nitzan remarked.

The state attorney also voiced criticism on the Likud's recommendations bill, barring police from going public with enough evidence to indict. "The recommendations bill will hurt the State Attorney's Office's work. If you understood which public interest that served, it would have been all right. So long as we were dealing with barring the police from making their stance public, it could be a matter of debate.

Nitzan also again criticized MK Amsalem's recommendations bill (Photo: Alex Kolomoisky)
"The bill was changed and softened, but the mere transference of information is important. We need to have the best possible tools at our disposal to reach the truth in order to make the right decisions. The guideline as it stands today says there is no publication (as to whether to indict) unless there's a public interest to do so.

"There's a sense the police and State Attorney's Office are being attacked by different entities, in our case from different directions. Attorneys are threatened and there has been a spat of lawsuits, sometimes merely to terrorize, and a wave of legislative attempts intended to weaken us and hinder our efforts. A strong state attorney is in the public's interest. We have to be allowed to do our duty in the best possible manner. Nothing will deter us from carrying on the fight against corruption," Nitzan vowed.