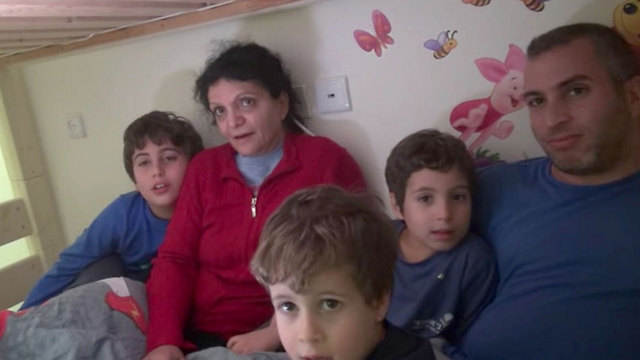 Sderot residents get no reprieve from rocket threat

Accustomed but not at peace, resident of Jewish communities near the Gaza border again have to cope with the threat of rocket fire from the strip, resigning themselves to be within running distance to a bomb shelter at all times.

Residents of communities in the Gaza vicinity who were forced to flee Friday to shelters and protected areas due to rockets being fired from Gaza said Saturday they knew it was coming, but knowing never makes it any easier.

"We knew it would happen. We're not going to sleep peacefully tonight," they said after three rockets were launched from the Gaza Strip, the last of which exploded in the heart of Sderot. There were no casualties but several cars were damaged. IDF retaliated hours later, destroying Hamas targets and killing two Hamas militants.

Tal Bornstein, with his mother and three children, spending the night in a security room (Photo: Barel Efraim)
A short time before the last rocket was fired, the IDF attacked a training compound and a Hamas weapons storehouse in the northern Gaza Strip in retaliation of earlier rockets being fired into Israel. "There were huge explosions that shook the windows of the house," said Rafi Amar of Sderot. "The table that was already ready for Shabbat meal shook. The glasses, the plates, everything. "The rocket was intercepted right above our heads. It was frightening. And the truth is that, after everything that happened that day, I knew it was bound to happen." On Thursday, a "day of rage" was declared in the Gaza Strip and the West Bank and thousands of Palestinians demonstrated at different locations following the announcement by US President Donald Trump that the US now recognizes Jerusalem as the capital of Israel. In clashes between Palestinians and security forces, a 30-year-old Gaza resident was killed, and a few hours later, another Palestinian demonstrator, 54, was killed. Scores more were injured.

Clashes in Bethlehem (Photo: EPA)
"The clashes that took place throughout the day along the security border indicated that there will be rockets in the evening," Amar added, speaking from experience. "In general, it's something that repeats itself. Every time something happens in this country, it always comes out of the Gaza Strip. "I'm troubled, and tonight I know I'll go to sleep but not peacefully. Everyone is staying vigilant. I have no doubt that something will happen soon enough." The residents of southern Israel, and of Sderot in particular, grew accustomed to this after years of repeated attacks, suffering rocket fire from Gaza whenever tensions between Hamas—which rules the Strip—and Israel escalate.

Aftermath of the IDF's retaliation to the attack on Sderot (Photo: Reuters)

"We understood that there was going to be tension, we assumed there would be, and now we already feel it in the air," said Tal Bornstein, a resident of one of the communities in the Gaza vicinity, while sitting in security room with his mother and three children.

"Right now we are in the security room, just in case, because in our area we have at best seven seconds to reach a protected area, and usually only two or three seconds. So in the meantime we are here, having some family time."

Regarding the question of where he and his family will sleep tonight, Bornstein replied unequivocally: "Tonight we will sleep in the security room."

Reinforced security rooms are required to be built in all new buildings by Israeli law.

Rocket landed in a street in Sderot
"For a long time, I think since Operation protective Edge, we have not been instructed to stay near protected areas," said a resident of one of the kibbutzim in the Sdot Negev Regional Council. "It's not pleasant, certainly not on Friday night, which basically means that we will not be able to leave the house. We're not staying in the security room but we also do not leave the house and stay close to it for safety's sake. "I hope it will pass quickly. There's tension in the air, but not something we never felt before."

Clashes in Ramallah (Photo: AFP)
The residents of the south suffered not only from explosions and alarms, but also from the demonstrations that went on near the security border from Thursday through Friday. During the demonstrations, the IDF used tear gas to disperse the crowd of rioters that had gathered along the fence. The wind carried the gas eastward, reaching the settlements in the Gaza vicinity. Local residents complained of eye, respiratory, and skin irritations.