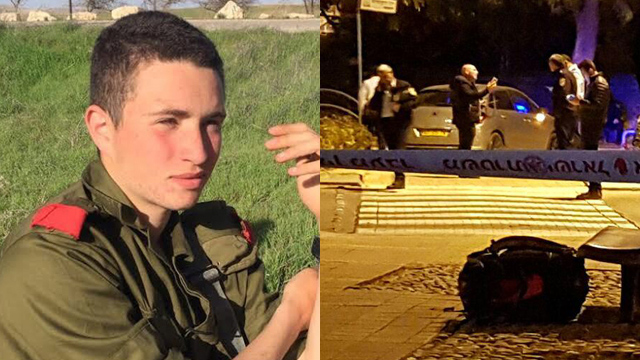 The bill calling to sentence terrorists to death, a flagship piece of legislation for the Yisrael Beytenu party and also enshrined in coalition agreements, was approved last week in a forum of coalition party leaders, paving the way for its expected vote at the Knesset plenum vote this week.

The bill may reach the Knesset as early as this Wednesday if enough time remains after the vote on the Recommendations Law.

While no coalition dissent is expected, the opposition has criticized the possible law, reminding its proponents that a military tribunal can already sentence to death anyone convicted of terrorism if the judges decide unanimously on the verdict, thereby rendering the law moot.

Yisrael Beytenu countered the claim, however, by saying the bill allowed tribunals to sentence terrorists to death with a simple majority vote, while also allowing civilian courts to do the same.

If the bill passes, slain soldier Ron Kokia's murderers may face the death penalty (Photo: Ilana Curiel)
Two people who may be affected by the bill's passage are Khaled Abu Jaudah and his half-brother Zahi Abu Jaudah, two Bedouin from Kuseife who were indicted Sunday morning for the murder of IDF soldier Ron Kokia in Arad a month ago. The Jaudah family disavowed the two suspects and was not present at their court date. One of Zahi's relatives said, "He wasn't in on it. He was forced to help his brother." "It's hard for us. We're friends with Jews and were completely blindsided by their arrest. Khaled is an educated young man, it's really not clear what happened. Their father is in complete shock," said another relative.

Boaz, the father of the slain soldier, was present at the hearing and let loose on the defendants following the court's ruling with a verbal onslaught.

"If you were in my hands I'd slaughter you. We want to know who murdered our son. I'll look them in the eye and make sure they die," Boaz said.

Kokia's father Boaz said he could kill his son's murders himself (Photo: Herzel Yosef)
"I call on the court to deal with the murderers and their families, which contributed to the act by their criminal conduct, harshly. It's important, both because we—as the victim's family—deserve justice and to deter other potential murderers. Beyond the death sentence I think the murderers deserve, or at least a prolonged prison term, punishment should also be financial, such as revocation of rights or reimbursing the state for the expenses and damages done to it because of the murder," the grieving father said.

Other families who have lost loved ones to terrorism joined Boaz Kokia's call. Hadas Mizrachi, the widow of Commander Baruch Mizrahi who was murdered in an attack that took place on Passover eve in Kiryat Arba three years ago, told Ynet, "Ron Kokia's father's cry must be heard at the offices of decision makers.

"The time has come for the death of innocents to be answered in kind. We call on the government's ministers to support the bill authorizing the execution of those who have murdered our loved ones. The State of Israel must create a real, significant deterrence against terrorism raging in the streets."

Baruch Mizrahi's widow said Israel must create real deterrence against terrorists (Photo: Ido Erez)
Michal Salomon, who lost three family members in a Halamish terror attack several months ago, said, "A despicable murderer who took a life must forfeit his. That is the only way of reducing the chance of them murdering again to zero. This punishment is only part of the deterrence package. Conditions in jails should also be changed for the worse for those killers."

'Put a stop to the murder industry'

The bereaved families' "Choose Life" forum was created two years ago and counts more than 100 families as members, mostly, though not exclusively, from the last wave of terror.

Among the families belonging to the forum are also non-Jewish bereaved families, such as the family of Yosef Othman, who was murdered in the Har Adar terrorist attack this past September. The forum's goal is to help promote the aforementioned "deterrence package" against terrorists in an attempt to prevent further attacks. The families are supporting the death penalty bill while also seeking degradation in the conditions enjoyed by incarcerated terrorists. Chairman of the right-wing Im Tirzu movement Matan Peleg, whose organizations accompanied the Choose Life Forum, said, "The State of Israel is under a permanent terror attack and only the wondrous abilities of security forces stopped hundreds of attacks from succeeding in the past year. The only way to stop the industry of terror is by creating a real deterrence package, with death penalty as its crowning jewel. When the package also includes deporting their families to Gaza, demolishing their homes and revoking their prison benefits, then the murder industry may be stopped."

Attorney General Avichai Mandelblit is opposed to the death penalty bill for terrorists, as he opposed a previous bill floated by Justice Minister Ayelet Shaked to sentence child murderers to death.

Mandelblit's stance mirrors those of all previous attorneys general, who have opposed the death penalty since Israel's inception despite its existence in both civil and military law.

The attorney general's original opinion, submitted to Prime Minister Benjamin Netanyahu and members of the Ministerial Committee for Legislation over a year ago following then-MK Lieberman's proposal, determined the death penalty was not a deterrent when it came to terrorists.

The judicial system maintains a clear and present trend among the countries in the developed world is to abolish the death penalty.

"More than two thirds of the world's countries have abolished capital punishment. In the European Union, for instance, it's completely banned," judiciary sources said.

The only Western country to still carry out death sentence is the United States. "But even there, states have begun abolishing it, with only 31 states having capital punishment on their books today. Seven states abolished it in the past decade alone," the source said.