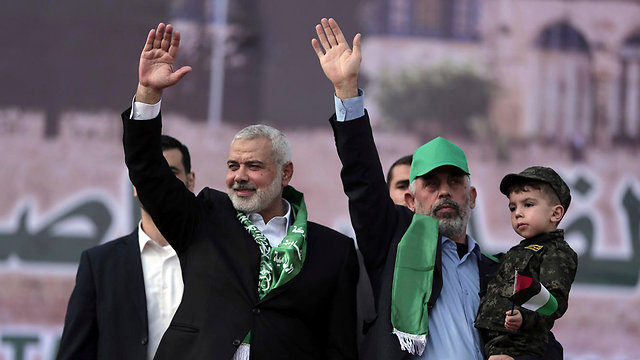 Instead of making decisions on Gaza, Israel is waiting for a miracle

Op-ed: The stories we are being told about Hamas’ efforts to curb the rocket fire are aimed at justifying Israel’s ‘proportional’ responses, which are failing to convince Hamas to take responsibility for the situation in the strip; Israel’s political echelon is incapable of telling the public: A war isn’t something we need right now.

The attempt made by the defense establishment—from the defense minister through the chief of staff to the military PR system—to downplay the escalation process on the Israel-Gaza border presents a very partial picture, to say the least.

This isn’t just about counting the rockets and mortar shells fired at Israel in recent weeks, but a much more fundamental process Hamas is going through, which is raising the temperature on the border. And it’s only the beginning.

According to Arab media reports, when the Egyptians appealed to Hamas to curb the rocket fire on Israel, the organization responded that it was no longer responsible for the strip’s affairs and that the authorities had been handed over to the national agreement government.

Hamas basically presented Israel, the Palestinian Authority and Egypt with a fait accompli: We are not responsible for rocket fire carried out by organizations that are not subject to our military wing.

One has to be naïve to believe that Hamas has given up its control of the intensity of the flames, but the military wing in fact decided about a month ago that the force responsible for thwarting high-trajectory fire from the strip by the rebel opposition organizations, the Salafists and others, would no longer be active.

Israeli officials have been trying to tell us in recent weeks about Hamas’ efforts, about dozens of Salafists who have been arrested and tortured in prison, etc. These stories are aimed at justifying Israel’s “proportional” responses, which are failing to convince Hamas to take responsibility again—and the rocket keep pouring. Caught in its own impassioned security rhetoric, Israel’s political echelon is incapable of telling the public: We accept the defense officials’ stance that a war isn’t something we need right now.

At first, the drizzle of rockets was aimed at serving the negotiations for the internal Palestinian reconciliation and pressuring the PA to release funds. But since US President Donald Trump’s Jerusalem announcement, this drizzle received further political volume and turned into a Hamas policy aimed at raising the level of escalation along the border with Israel.

Hamas isn’t firing the rockets itself, but it is creating an atmosphere of resistance through protests along the Israel border, while operating a PR system and using aggressive moves to renew the intifada in the West Bank and Gaza. all this is joined by a move that burst into Israeli consciousness with a bang last week: The establishment of unprecedented relations between Hamas’ military wing and the Iranian Revolutionary Guards.

Israel has realized that Hamas doesn’t need Hezbollah to reach the heads of the Revolutionary Guards. The promise made by Qassem Suleimani, commander of the elite Iranian Quds Force, which was mentioned by Sinwar in public, was seen as a public confirmation of the new alliance, which Israel is so concerned about. The Revolutionary Guards can provide Hamas’ military wing with money, knowledge and military equipment. They can open new fronts for Hamas against Israel, from southern Lebanon or Syria.

For now, the operative relationship is still in its infancy, on the level of talks, experts and money. Sinwar turned to the Iranians having no other choice. A collapse of the reconciliation plan, which he has pinned all its hopes on, could exact a heavy toll on him and on Hamas.

Meanwhile, Gaza keeps deteriorating: The banks are running out of liquid assets; UNRWA, the second biggest employer after the PA, is facing a financial crisis and will be forced to dismiss workers and make aid cuts. If someone doesn’t arrive with money, the strip will burn.

Israel is supposed to make a choice between two evils: Letting Hamas turn to Iran in its distress or helping the Palestinian reconciliation process, which will infuse money into Gaza but may turn Hamas into another Hezbollah. Israel doesn’t want to choose.

Last weekend, Yedioth Ahronoth revealed Deputy Minister Michael Oren’s plan to improve the economic situation in Gaza, which was prepared at the prime minister’s orders and then thwarted. No one here wants to make any decisions. They’re waiting for a miracle. Perhaps there will be a revolution in Iran after all.