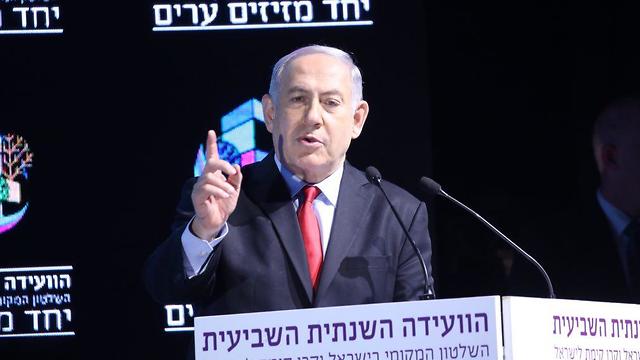 Speaking a day after recommendations were made by police to indict him for bribery, PM Netanyahu says, 'Recommendations report biased, extreme'; on Yesh Atid Chairman Lapid being a key witness in gifts affair, Netanyahu says he did not recuse himself from dealing with matters relating to Milchan despite their own personal friendship; 'I get recommendations while Lapid gets the applause,' PM protests.

Offering his second public comments following the police making public its recommendation to indict him for bribery, Prime Minister Benjamin Netanyahu said, "After reading the recommendations report, I can say it is a biased, extreme document that's as full of holes as Swiss cheese and that does not hold water."

The prime minister was speaking at an annual conference organized by the Federation of Local Authorities and Keren Kayemeth LeIsrael held at the Tel Aviv Convention Center. Netanyahu began his comments on Case 1000, concerning alleged illicit gifts received from businessman Arnon Milchan, and said, "I want to reassure you, the coalition is stable. No one, not I, not anyone else, has plans to go to an election. We will continue to work with you for the good of Israel's citizens until the end of the term."

The police's recommendations report was full of holes like Swiss cheese, PM Netanyahu said (Photo: Motti Kimchi)
The police's recommendation document, the premier claimed, "ignores and covers up a close 20-year friendship between Arnon Milchan and myself and between our families—a friendship that included the mutual exchange of gifts dating back to the time I was a private citizen and long before assuming office. "Secondly, the document inflates the sums in question beyond recognition, citing enormous expenses that have nothing to do with me, all in an attempt to reach a predetermined amount. "Thirdly, it simply ignores two incontrovertible facts that I presented yesterday and that were well known—that I did not work for Milchan but against him. I first broke his monopoly on importing vehicles, which was worth a fortune, and then moved to close Channel 10, which he owned, a move that would have rendered his stock worthless. "So how can I operate for Milchan on the one hand and against him on the other? The answer is, I have done neither. I have only done what I thought was right for the Israeli economy or society, and care nothing for the interests of any specific person."

'I have only done what I thought was right for the Israeli economy or society, and care nothing for the interests of any specific person,' the premier added (Photo: Motti Kimchi)
As for Case 2000, which concerns conversations Netanyahu had with Yedioth Ahronoth owner and publisher Arnon Mozes, the prime minister said, "I'm not sure relations between politicians and journalists should be investigated, but if we're going into it, how could it be that I—who blocked the Israel Hayom bill and dissolved the Knesset to bury it—am investigated while the 43 MKs who sponsored, promoted and voted on the bill are not?"

Commenting on Yesh Atid Chairman Yair Lapid being a key witness in the Milchan affair, Netanyahu said, "The world went topsy-turvy when it comes to Lapid. He said he was interrogated for an hour. I was asked only a handful of questions on the matter, and said I did not act for Milchan.

"One hour for him and a handful of question for me, over the course of an 18 month investigation, and now it turns out Lapid is a key witness. "That says a lot about these recommendations and about the entire process leading up to them. It's the same Lapid, naturally, who promised to take me down no matter the cost. It's the same Lapid who is a close friend of Milchan—there's nothing wrong with it, but they're close friends.

Netanyahu accused Yesh Atid Chairman Lapid of not recusing himself from dealing with matters relating to Milchan while testifying against the prime minister's own ties to the businessman (Photo: Motti Kimchi)
"He was employed by Milchan, he had discussions with Milchan while he was the finance minister tasked with overseeing affairs relating to Milchan—meaning he did not recuse himself from dealing with them—and then he became a key witness. "I wonder what might have happened if I had done the same. I would be questioned under caution seven times, but here the world went topsy-turvy. The minute Lapid uttered the magic word—'Netanyahu'—the world went upside down. I get recommendations, while Lapid gets the applause." Concluding his remarks, the prime minister said, "This argument cannot tackle the close friendship I had with Milchan and so it attempts to paint a false picture of quid pro quo that never happened—save for the matter of (Milchan's US) visa.

"This report, therefore, is biased, extreme and full of holes, and runs contrary to both facts and reason. It is the reason I told you yesterday that I remained sure, as I have always been sure, that the truth will come to light and nothing will come of this."

Bennett offers first comments: 'PM should serve as an example'

In his own speech, Deri briefly touched on the recommendations against the head of the coalition and said, "I join the estimate that the government will continue to the end of the term and, God willing, continue leading after the next elections as well."

Education Minister Bennett (Photo: Motti Kimchi)
Bennett then took to the stage to provide his own first comments on the recommendations, and said, "Last night was an unpleasant moment for every Israeli citizen, especially the prime minister himself, who's a person first and foremost. "I believe the prime minister has two tasks: to preserve Israel's safety and to serve as an example to the people of Israel. "As a member of two of Netanyahu's cabinets, I can attest to the prime minister administering the country's affairs in a worthy, proper fashion and out of a deep sense of dedication. "As a member of the Security Cabinet for the past five years, I can also clearly determine that Prime Minister Netanyahu is committed to the country's security and have no doubts he will never do anything to jeopardize it for any ulterior motive, as has been hinted recently." The Bayit Yehudi chief did criticize the prime minister's conduct, however, in saying, "When Netanyahu was up here a few moments ago and said he worked out of the best interests of the state of Israel, I believe him. However, the prime minister has an additional task, which is setting a personal example to the Israeli public in general and its youth in particular. "The prime minister shouldn't be perfect, or live a Spartan lifestyle, but he should be someone of whom it can be said, 'That is the way to behave.' Unfortunately, receiving gifts of such magnitude is not congruent with Israelis' expectations. "The law, however, is clear and says the prime minister can continue serving despite recommendations. This is a state governed by law, and Prime Minister Netanyahu is presumed to be innocent. In light of this fact, I have made a decision to wait for the attorney general to decide (on indictment). I trust his judgment. On the moral level, let the public decide on election day." "Until such time as the attorney general decides, I call on all parties to show restraint and responsibility. Refrain from accusing the police of orchestrating a coup on the one hand—I trust the police and its commissioner—but don't forget the presumption of innocence, as some in the opposition have, on the other." "The State of Israel is not a corrupt country, and it did not become one with one newscast," Bennett concluded. The education minister was then followed by his party member, Justice Minister Shaked, who clarified, "The police does not recommend indictment. It investigates and determines whether an evidential basis for carrying out the alleged offenses exists. Only one person decides whether to indict a politician—Attorney General Avichai Mandelblit." "I trust Mandelblit's judgment," Shaked added. "He knows the political arena, and that's important." "The presumption of innocence is slowly eroding in Israel. Any man is innocent until proven guilty and has a right to maintain his good name," she concluded.

Defense Minister Lieberman said to oust the prime minister would be a coup (Photo: Motti Kimchi)
Defense minister Lieberman echoed Shaked's views on the presumption of innocence. "Only one body is qualified to determine whether someone is guilty or innocent, and it isn't the media but the courts system. The rest is pulp fiction. A kind of reality show, and I never cared for those." On whether he thought Netanyahu could continue serving as prime minister, Lieberman said, "Absolutely. I think we all should comprehend the meaning of this—if a prime minister is ousted, that's a coup. So long as the prime minister is not convicted, he can continue serving."   The police's announcement aroused a wave of responses in Israel's political arena. While the opposition called on Netanyahu to step down, the coalition toed the same line the premier presented in his first speech after the recommendations were made public. "The recommendations cast a long shadow," Netanyahu said then, "with no less than 15 inquiries and investigations opened against me in the past few years, and this time again it will conclude with nothing."

Finance Minister Kahlon said he had no intention of leaving the government following the police's recommendations (Photo: Alex Kolomoisky)
Finance Minister Kahlon left no doubts as to where he stood as well, saying he had no intention of leaving the coalition. He said, "I'm aware of murmurs in the public—both on the Left and the Right—regarding the police's recommendations on the prime minister's investigations.

"The law states that only the attorney general may make the final decision on whether to indict or not. "Until such time as he does, I'll continue leading and steering Israel's economy for the betterment of all Israelis."