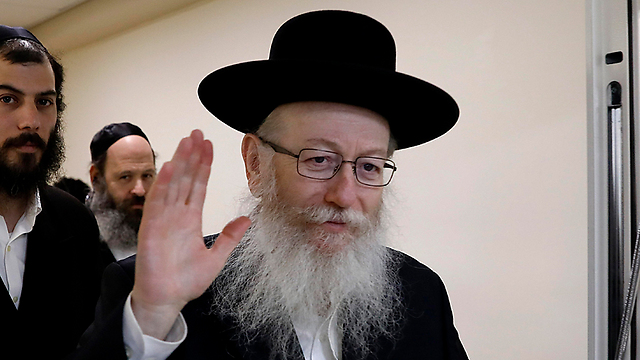 Deputy Health Minister Litzman insists on demand to pass in third reading legislation that would solicit state recognition of Torah studies to being equal to military service before the 2019 state budget, saying 'the Likud party has not had any talks with us about the draft law.'

Deputy Health Minister Yaakov Litzman rejected on Tuesday attempts in the coalition to reach a compromise over the amendment to the draft law.

The United Torah Judaism party (UTJ) threatened last week not to support the 2019 state budget unless an IDF conscription bill, which would solicit state recognition of Torah studies to being equal to military service, is brought for a vote and passed in the Knesset first. "We remain steadfast in our demand to pass the legislation in all of its (Knesset) readings before the vote on the budget, and nothing has changed," Litzman told the ultra-Orthodox newspaper Hamodia, which is affiliated with UTJ.

Deputy Health Minister Litzman (Photo: EPA)
The deputy minister complained to the paper that "since the beginning of the crisis, the Likud party has not had any talks with us about the draft law."

Litzman's close associates added that the only serious overture he received so far was from Justice Minister Ayelet Shaked, a member of the Bayit Yehudi party.

Litzman appears to be the only one who is against a compromise. "Litzman took Shas as hostage over an issue that is not even on our agenda," a Shas official said.

A Likud official slammed Litzman, saying he is "being led by the Rebbe of Ger, who is waging a war against the Haredi draft, drives Litzman crazy, and Litzman drives an entire country crazy."

Prime Minister Benjamin Netanyahu's people, led by Minister Yariv Levin, launched a more intensive mediation effort on Monday, while Bayit Yehudi's Shaked and Education Minister Naftali Bennett also opened their own independent mediation channel in an attempt to reach a compromise to resolve what they dubbed to be a "fake crisis." In a message to his Bayit Yehudi party members, Bennett said Monday that "the issue with the draft (law) is definitely solvable. It's not one of the complicated crises either."

He criticized Netanyahu's inaction, saying, "The way I see it, no one, not even Netanyahu, has really taken the bull by the horns and tried to reach a compromise. That is why we came into the picture."

Education Minister Bennett (Photo: Ohad Zwigenberg)
He also encouraged his party members to give interviews to the media and come out against the idea of dissolving the Knesset and calling early elections. Among the compromises proposed was the possibility of approving the conscription bill in the Ministerial Committee for Legislation and in a preliminary reading at the Knesset, while at the same time petition the High Court of Justice and ask for a postponement for the new draft law, which the court ruled must be passed by September. Defense Minister Avigdor Lieberman said during the Yisrael Beytenu faction meeting Monday that "Passing such a complicated law like the draft law in three readings within one week seems completely unreasonable."

"This isn't legislation but theft, and instead of a law we'll end up with a parody," he added.

Defense Minister Avigdor Lieberman (Photo: Alex Kolomoisky)
Finance Minister Moshe Kahlon, meanwhile, said that he would not be able to remain in office if the government failed to pass the 2019 state budget. The coalition is on a tight schedule. Netanyahu, who is in the US on an official visit, will only return to Israel on Friday. Until then, he will have no choice but to handle the coalition crisis from afar. He will have to help reach a compromise soon, because the Knesset is scheduled to hold a discussion on the matter, convened by the opposition, on Monday. The government’s original plan was to pass the 2019 budget in second and third readings next week (March 13-15), a move that would have allowed the current coalition to hold steady until November 2019. It is critical for the vote to be held on time, as the Knesset is going on hiatus on March 18.