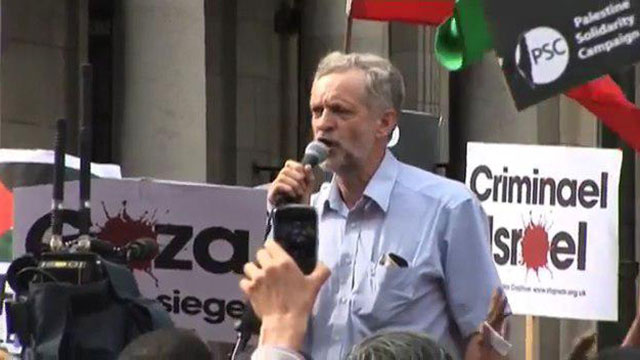 Referring to MPs' speeches in aftermath of Mavi Marmara incident, Corbyn charged in 2013 that they all contained certain keywords in the latest of numerous controversial comments that have recently come to light; Rabbi Sacks: Corbyn is an anti-Semite.

British Labour leader Jeremy Corbyn claimed in 2010 that Israeli officials control the speeches of British parliamentarians, in yet another apparently anti-Semitic statement brought to light Tuesday by the British Daily Mail.

According to the paper, Corbyn was filmed at a meeting of the Solidarity Campaign for Palestine in London speaking about the Mavi Marmara incident, when Shayetet 13 naval commandos raided a Turkish vessel trying to “break the siege” on Gaza. Ten Turkish nationals were killed in the raid.

"British parliamentarians arrived at the parliament with pre-prepared speeches, and I am sure that your friend Ron Prosor (the Israeli ambassador to Britain at the time—ed.) wrote them, because all of them featured the same keywords," Corbyn said in his remarks at the event.

Corbyn said that "fashionable" terms that repeated themselves included: "Israel's need for security," "the extremism of people on one ship" and "the existence of Turkish militants on this ship."

"These expressions were mentioned in every single speech," Corbyn said.

Navy storms the Mavi Marmara (Photo: AP)
The Daily Mail says it has examined the transcripts of the speeches Corbyn was referring to and found no evidence to support his claims. Conservative and Labour MPs who attended the parliamentary debate told the newspaper that no Israeli official prepared the speech for them. Gideon Falter, Chairman of the Campaign Against anti-Semitism, told the Daily Mail that "Anti-Semitic conspiracy theories present the Jews as malicious manipulators who pull strings and undermine democracy. It seems that without any evidence, Corbyn has visions in which the Jewish state literally implants words in the mouths of many of our politicians." “In practice, with regard to malicious influence from the Middle East, the only politician who comes to mind is Mr. Corbyn himself, with his schedule filled with visits to anti-Semitic terrorist organizations that seek genocide,” Falter asserted.

Corbyn at Black September terrorists graves
Corbyn has been known for years as a firm opponent of Israel, and in the past has described Hamas and Hezbollah as his "friends." Although his ties with radical Palestinian and Arab elements have been known for years, the British media has been exposing more and more of his less familiar statements and actions that carry a strong anti-Semitic and anti-Israeli flavor in the past few weeks, against the backdrop of the anti-Semitism scandal in Corbyn's party. For example, it was revealed that in 2012 Corbyn attended a conference in which Hamas prisoners released in the Shalit deal spoke, and described their words as "fascinating and electrifying." Corbyn wrote in the Morning Star newspaper in praise of the conference, calling the terrorists "brothers" and glorifiying their speeches. In 2014, he participated in a memorial ceremony for terrorists from the "Black September" organization that murdered the 11 Israeli athletes at the Munich Olympics. Following this exposure and the controversy it aroused, Corbyn and Prime Minister Benjamin Netanyahu verbally clashed on Twitter.

Last week, the Daily Mail revealed that in a speech in London in 2013 at a conference convened by the Palestinian Return Center and attended by radical Islamists and, Corbyn spoke about the importance of history and of how necessary it was for people to understand the origins of the conflict between Israelis and Palestinians.

He said Zionists had "two problems"—firstly, that they do not study history and, secondly, they do not understand English irony.

After the emergence of footage, Labour asserted that Corbyn had been referring to a "group of pro-Israel activists" and had not been singling out Jewish people as a whole.

Rowling hit back, saying, "How dare you tell a Jew that their outrage is 'patently synthetic'? How dare you demand that they lay bare their pain and fear on demand, for your personal evaluation? What other minority would you speak to this way?"

She later added, "How about you explain—publicly, to Twitter, to the world—why you've taken it upon yourself to attack a Jew, demanding that they explain themselves, when there are literally hundreds of accounts currently online explaining how British Jews currently feel?"

Britain's former chief Rabbi Jonathan Sacks also came out against Corbyn's claim, saying it was the most offensive comment by a senior UK politician in half a century.

Sacks, who was Britain's chief rabbi from 1991 to 2013, accused Corbyn of having "given support to racists, terrorists and dealers of hate who want to kill Jews and remove Israel from the map." He said Corbyn had depicted a group of British citizens as "essentially alien" when saying in that British Zionists "don't understand English irony" despite "having lived in this country for a very long time".

"When he implies that, however long they have lived here, Jews are not fully British, he is using the language of classic pre-war European anti-Semitism," Sacks told the New Statesman political magazine.

Rabbi Jonathan Sacks
"Now, within living memory of the Holocaust, and while Jews are being murdered elsewhere in Europe for being Jews, we have an anti-Semite as the leader of the Labour party and Her Majesty’s opposition. That is why Jews feel so threatened by Mr. Corbyn and those who support him," he added.  Labour said in a statement there is no place for anti-Semitism in their party and that they are committed to rebuilding trust with the Jewish community. Some opinion polls put Labour ahead or level with Prime Minister Theresa May’s Conservatives, meaning he is a potential British leader, although the next election is not due until 2022. Sacks compared Corbyn's comments to the infamous "Rivers of blood" speech by Enoch Powell in 1968 in which the then-Conservative shadow cabinet member warned of the dangers of immigration. His speech is widely regarded as one of the most divisive made by a modern British politician. Labour dismissed the comparison with Powell as "absurd and offensive." Since unexpectedly becoming Labour leader in 2015 after decades spent on the left-wing fringes of the party, Corbyn has repeatedly faced accusations of turning a blind eye to anti-Semitic comments in the party and among groups he supports.

A long list of party members have become embroiled in anti-Semitic statements in recent years, including senior politician Ken Livingstone, who claimed that Hitler was in fact a passionate Zionist and Naz Shah, who called for a "relocation" of Israel to the United States.

In light of the incidents, Corbyn admitted that the party had a problem and repeatedly promised to fight anti-Semitism within its ranks. But anti-Semitism has not been uprooted and recently, more and more problematic statements are coming to light that have been made by party officials against Israel and the Jews.