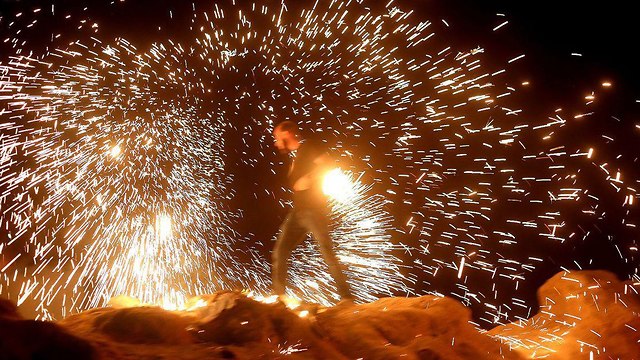 Following Hamas' promise to intensify border violence after ceasefire talks halted, dozens of demonstrators mass at several points along security fence with a 21-year-old man reported to have been shot dead by IDF troops, according to Palestinian health officials; IAF strikes an incendiary balloons cell.

Gaza's Health Ministry says a Palestinian has been killed and 20 injured by Israeli gunfire in east Gaza. A ministry statement said Sunday that the 21-year-old died in overnight skirmishes between dozens of protesters and Israeli forces. The IDF said a drone fired at Palestinians who flew incendiary kites and balloons toward Israel.

Sami Abu Zuhri, an official in Gaza's Hamas government, said Sunday that Hamas is stepping up protests along the fence between Gaza and Israel because Egyptian-mediated talks on a deal between the militant group and Israel foundered. Hamas hopes a deal would end a decade-long blockade imposed by Israel and Egypt when the group took over Gaza.

On Saturday, a delegation of Egyptian officials visited Gaza in an attempt to renew talks on a long-term ceasefire arrangement with Israel.

Palestinian sources said the main obstacle to reaching an agreement is a stance of the Palestinian Authority's leader on the issue.

On Sunday, nine fires broke out in the Gaza border region as a result of incendiary balloons flown from the strip into Israel.

The biggest fire was reported in the wadi of Nahal Gerar in the Negev desert, where almost 300 dunams of land had been burned down.

On Saturday, eight fires broke out in the Gaza border communities as a result of incendiary kites and balloons. One of the fires started in the Nahal Bohu Park at the entrance to the southern city of Netivot.

On Thursday, an IAF aircraft once again attacked a terror cell in the northern Gaza that was launching incendiary kites and balloons into Israeli territory.

Earlier on Thursday, six fires broke out as a result of incendiary balloons and one fire was started by an incendiary kite. The areas which were affected by the flames are: Kibbutz Nir Am, the Be'eri Forest, the Kissufim Forest and Shokeda Forest.

On Friday, the clashes along the security fence had resumed, with thousands of Gazas gathering at several points locations near the Israeli border.

Hamas has led weekly protests since March, demanding in large part an end to the decade-long Israeli-Egyptian blockade that has crippled Gaza since Hamas assumed control of the coastal strip