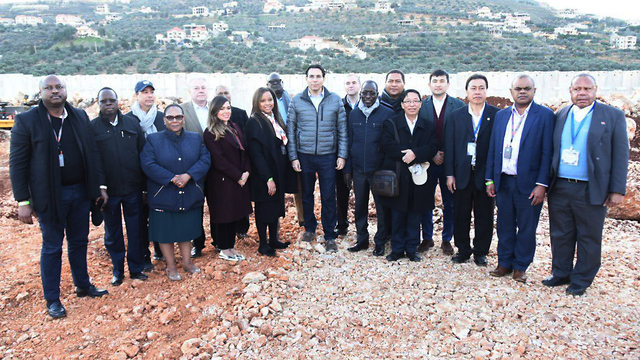 Israel pushes for UN to declare Hezbollah as a terror organization

Senior IDF officials are expected to brief the members of the UN Security Council on the Iran-backed group's activity in Lebanon, voicing their concerns over its further strengthening in the country and its entrenchment in Syria.

In a bid to persuade the members of the United Nations Security Council to dub Hezbollah as a terrorist organization, senior officers from Israel's Military Intelligence Directorate are expected to brief the members of the international body on the Iran-backed group's activity in Lebanon. They will voice their concerns over its further strengthening in the country and the establishment of extensive terror infrastructures, and also raise the need to prevent further Iranian entrenchment in Syria.

Although Hezbollah is already considered a terrorist organization by multiple countries, including Israel, the US and members of the Arab League, its members serve in the Lebanese government. Over the past few months, the Israeli mission to the UN headed by Ambassador Danny Danon has been waging a campaign to get the UN Security Council to declare the Shiite organization as a terrorist group.

As a result, the Security Council held a meeting in December to discuss the Hezbollah attack tunnels dug from Lebanon into Israel, which were uncovered by the IDF during Operation Northern Shield in December. The tunnels, of which Israel uncovered six, are believed to have been dug by Hezbollah fighters in order to carry out attacks on civilians in the Galilee.

The meeting, called by the US at Israel's request, also dealt with Hezbollah’s alleged violations of UN Resolution 1701. The resolution, which ended the 2006 Second Lebanon War, calls for the disarmament of the Iranian-backed organization and its activities in southern Lebanon.

Last week, dozens of UN ambassadors visiting Israel toured a site near Metula where the army discovered the cross-border tunnels. Engineering troops gave the diplomats a tour of a tunnel using a robotic camera. The tour was organized by Danon.

"The struggle we are waging against Hezbollah is both military and diplomatic. Its definition as a terrorist organization is imperative to harm the global terror apparatus, which is based in Tehran," Danon said.

The diplomats met with President Reuven Rivlin and Prime Minister Benjamin Netanyahu before flying in a seven-helicopter convoy from Jerusalem to the north of the country. During their meeting, Netanyahu stressed Iran's chokehold on Lebanon via its proxy Hezbollah.

As the tour ended, several UN ambassadors said they would support Israel's attempts to convince the Security Council to declare Hezbollah as a terrorist organization.

The Panamanian Ambassador Melitón Arrocha Ruíz said that he came to see firsthand the hostile activities against Israel. “We will pass on what we saw and convey how Israel is thriving, open and democratic and that we all certainly share similar rule of law values,” he said.

South Sudan Ambassador Akuei Bona Malwal noted the importance of coming to see the facts on the ground: “For those of us who work in NY and hear all sorts of things, the best way is to come and see and feel exactly what is happening. We came to Israel to see the challenges and how they are being handled.”

The ambassador also pointed out the absurdity of the tunnels being dug under the nose of UN peacekeepers stationed in south Lebanon.