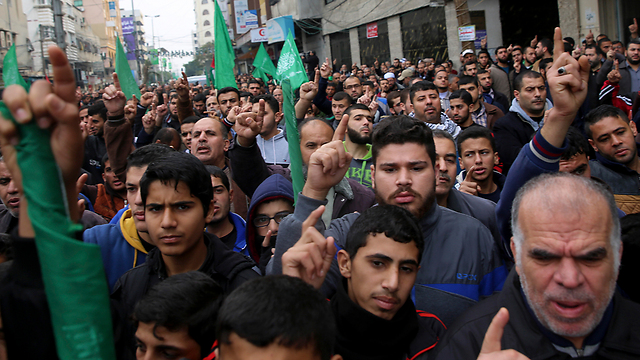 Analysis: As tensions between the Jewish state and the terrorist organization increase, Hamas' efforts to keep the strip from erupting in violence against Israel are put to the test.

The worst fighting on the Gaza Strip front since 2014 is being calibrated by Hamas, which wants to signal defiance of Israel and the United States while being careful not to trigger a new war for the enclave’s penned-in Palestinians.

Since President Donald Trump reversed decades of US policy on Dec. 6 by recognizing Jerusalem as Israel’s capital, Palestinians in Gaza have launched 18 cross-border rockets or mortars— Flare-up with Israel tests Hamas a third of all such attacks in 3-1/2 years of relative quiet.

(Photo: AP)
For Israel’s part, though residents in the south have raised a clamor for harsh retaliation, Prime Minister Benjamin Netanyahu’s government has counseled caution and targeted mostly unmanned Hamas facilities in night-time airstrikes. The careful moves reflect the balancing act maintained both by Hamas, the Islamist group that controls Gaza, and the Israeli government, old foes who share a reluctance to go to war again. Gaza’s neighborhoods still bear the scars of the destruction caused by Israeli attacks during a seven-week conflict in 2014. In Israel, there is little eagerness to endure the daily sirens warning of rocket strikes. But ordinary Israelis and Palestinians are keenly aware that even a single incident—a rocket causing multiple fatalities in Israel or Israeli forces killing a militant leader—could set off a conflagration that would be beyond their leaders’ control. Two Hamas gunmen have died in retaliatory Israeli air strikes and 15 protesters from Israeli gunfire. “The recent weeks of rockets and Israeli bombardment proved an explosion is possible,” said Gaza political analyst Akram Attalla. “How long will Hamas continue to take Israeli strikes to its positions without a response? And how long will Israel’s Netanyahu tolerate internal criticism? There is no guarantee.”

While there have been no Israeli fatalities or serious injuries in the rocket strikes, farmers in communities close to the Gazan border think twice about tilling fields where they might be exposed and children practice duck-and-cover drills should air raid sirens sound.

“Lately we do feel that there is more presence of the army. We have been told to be more careful, to clear the bomb shelter just in case. You never know when the next rocket will come,” said Hila Fenlon, resident of the farm collective Nativ Haasara.

Hamas political leader Ismail Haniyeh (Photo: AP)
Hamas has responded to Trump’s move by mobilizing mass protests at the border and turning a blind eye to other factions firing into Israel in two weeks of daily attacks, which have tailed off recently. “This saves face for Hamas, as it appears to be the one that stands behind these protests without the need to go to war,” said Attalla. A more violent response was tamped down in debate among Palestinian factions who agreed that an armed confrontation could erode the international support Palestinians have won diplomatically and shift attention from the political process. Hamas official Sami Abu Zuhri said no-one should underestimate the potential for hostilities to resume under what he called an Israeli occupation, however. Israel withdrew troops and settlers from the territory in 2005 but remains the conduit for the passage of goods and supplies most of its electricity. Israel and Egypt, citing security concerns, maintain tight restrictions on the passage of Palestinians through their borders with the enclave. “The situation in Gaza is very difficult and is not tolerable and is doomed to explode,” he told Reuters.

Israel sees an outside catalyst for the violence—Iran, which both Hamas and its sometime ally Islamic Jihad say has pledged unlimited assistance for them as the Syrian civil war, where Tehran deployed reinforcements for Damascus, winds down.

Israel has gone out its way to blame Islamic Jihad and other groups for the rocket and mortar attacks, rather than Hamas, and even gave grudging credit to Hamas for being mindful of Palestinian civilian needs. “Calls to respond with full force against Hamas are irresponsible,” the top Israeli general, Gadi Eizenkot, said in a speech last week. He noted Gaza’s “danger of humanitarian collapse”, which, he said, had forced Hamas to engage with Palestinian President Mahmoud Abbas and secured a renewed power supply to the enclave.

(Photo: Reuters)
Israel also has problems elsewhere. Having neutralized much of the rocket threat from Gaza with their Iron Dome interceptor system, and hard at a work on an underground wall that would block guerrilla tunnels from the territory, Israeli defense officials say they worry more about Iran and the combustible northern front with Syria and Lebanon. They also fear that the $1.1 billion sensor-equipped barrier on the 60-km (37-mile) frontier could tempt Gaza militants to use their tunnels to strike Israel before they lose them. A range of economic initiatives have been broached, from the construction of an island off Gaza to handle direct imports by sea to the issuing of more permits for Palestinian laborers or agricultural exports to enter Israel. “There is an effort to help the (Palestinian) population in a way that will not go to the armed wing of Hamas,” said Amos Yadlin, a former Israeli military intelligence chief and head of Tel Aviv University’s Institute for National Security Studies, which has prepared a 180-page memorandum on the Gaza crisis. Israeli concern about worsening Gaza’s internal problems has put it at odds even with the Trump administration, which has threatened to cut US contributions to the UN Relief and Works Agency (UNRWA) that provides essential aid for Palestinian refugees in the enclave, supporting and administering hundreds of schools and dozens of health facilities. Israel says funds should be cut gradually and UNRWA should ultimately be dismantled and its responsibilities transferred to the United Nations’ global refugee agency. Cutting aid to UNRWA would spell “huge pressures on Gaza’s residents,” said Saleh Naami, another Palestinian political analyst. Peter Lerner, a former Israeli military spokesman, agreed. “While UNRWA is far from perfect, the Israeli defense establishment, and the Israeli government as a whole, have over the years come to the understanding that all alternatives are worse for Israel,” he said.