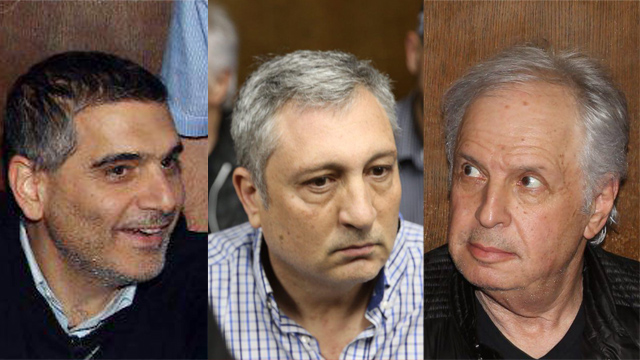 Three prime suspects in Bezeq affair, also known as Case 4000, intend to appeal decision to extend their remand, despite defense attorneys’ attempts to secure their immediate release in wake of publication of correspondence between judges and attorneys showing premeditated rulings ahead of hearing; new Judge: 'Despite legal flaws, court must still decide whether to release them.'

The Tel Aviv Magistrates' Court extended the remand Monday evening of Bezeq majority shareholder Shaul Elovitch, former advisor to the Netanyahu family Nir Hefetz and strategy advisor Eli Kamir in the Bezeq Affair (also known as Case 4000). Elovitch and Hefetz were remanded until Sunday, whereas Kamir was remanded until Wednesday in the affair despite their attorney’s efforts to secure their immediate discharge after disciplinary investigations were launched against Tel Aviv Magistrates' Court Judge Ronit Poznanski-Katz and the attorney representing the Israel Securities Authority (ISA), Eran Shacham-Shavit, after an exchange of text messages between the two raised suspicions they were coordinating the remand extensions of suspects.

L-R: Kamir, Hefetz and Elovitch (Photo: Motti Kimchi, Yariv Katz)
The three immediately announced their decision to appeal the court ruling. Judge Alaa Masarwa, who replaced Poznanski-Katz, dashed their hopes by refusing to acquiesce to their demands, despite the legal misconduct. “At the end of the day, even if there were flaws in the legal process, it is for the court to determine whether or not to release them under differing arrest conditions. At the moment, it isn’t possible,” he said.  The judge explained that after the publication of the text correspondence between Poznanski-Katz and Shacham-Shavit, the suspects’ defense attorneys filed for their release citing prior coordination. Kamir submitted a request that the matter be re-examined for similar reasons. “In light of the extenuating circumstances, I examined for myself the evidence, I studied all of it, including the material that was submitted to the courts and other materials,” Judge Masarwa said.

“Moreover, I addressed questions in writing to representatives of the investigative unit. There are many investigative materials involving many suspicions of things that were done by the senior officials.”

It is difficult, he added “to diminish the severity of the case. Reasonable suspicion arose before the current wave of arrests.”

Masarwa also emphasized that it could be confidently said that the suspicion against those involved was strengthened over time.

“As is known, in cases of these types there is suspicion of disruptions (to the legal process—ed.) The suspects who remained under arrest are central figures and are at the heart of the case.”

The judge also addressed the claims made by Hefetz about the conditions of his arrest.

“I’m not ignoring the suspicious claims about the conditions of the difficult remand. However, it is public interest vs the truth,” the judge reasoned, adding that the release of the suspects may harm the investigation.

“As for the just claim by the defense after the correspondence with the judge was exposed in which she was given prior requests, I will says that even if I address its gravity, I would still stand behind the interests of the public in light of the severity of the case and the abundance of evidence,” he insisted.

“The job of the court is to strike a balance between different interests and the exhaustive investigation and the curtailing of suspects’ rights. I have decided that the public interest has the upper hand.”

On Sunday, Kamir was released under limiting terms from his arrest in Case 1270 (concerning the alleged offer to appoint Judge Gerstel to attorney general in return for closing investigations against Sara Netanyahu—ed).

Shortly after, he was arrested in Case 4000 in which he is suspected of slanting the coverage on the Walla News! site in return for Ministry of Communications benefits for Bezeq, which is owned by Elovitch, and other companies he owns.