The ground is sizzling with tensions
Photo: EPA 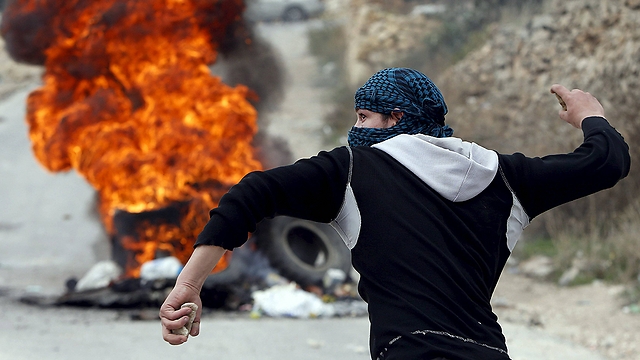 An escalation just waiting to happen

Analysis: Sunday’s deadly stabbing attack in Jerusalem, Friday’s deadly car-ramming attack in the West Bank and the recent murders of Rabbi Itamar Ben Gal and Rabbi Raziel Shevah could be just the start ahead of Nakba Day, Israel’s 70th Independence Day and the US embassy’s move to Jerusalem, and lead to a new round of escalation, which is exactly what Hamas is hoping for.

Are we at the start of a new security escalation? The murder of 32-year-old Adiel Coleman in Jerusalem’s Old City came just two days after a terror attack in the Samaria settlement of Mevo Dotan left Lieutenant Ziv Daus and Sergeant Netanel Kahalani dead. The past two months have also seen the murder of Rabbi Itamar Ben Gal and Rabbi Raziel Shevah in two other terror attacks.

An escalation usually breaks out after several variables converge at one point in time. That point in time can go on for days and even weeks, with each variable inspiring a different variable.

In the escalation of 2015-2016, which was accompanied by waves of lone-wolf terror attacks, mostly in the form of stabbing attacks and some ramming or shooting attacks, the variables that created the tangent points during those days were:

It took a long time for that escalation to slowly die down. It happened, eventually, also thanks to the Israeli defense establishment’s concrete efforts. Security forces monitored and managed to track down, within the ocean of information, the private people who had conveyed signs pointing to a possible intention to carry out a terror attack. The intelligence success exceeded expectations.

The soldiers murdered in the car-ramming attack (Photo: Ynet)

Rabbi Raziel Shevah, who was murdered in a West Bank shooting attack, with his wife Yael

Now, after quite a long period of relative calm, the ground is sizzling with tension again. Within just two days, attacks were carried out by two lone-wolf terrorists: On Sunday evening, in Jerusalem’s Old City, a Palestinian terrorist from the village of Aqraba near Nablus stabbed and seriously wounded Adiel Coleman, who later succumbed to his wounds; on Friday, a terrorist from the village of Barta'a murdered Lieutenant Ziv Daus and Sergeant Netanel Kahalani in a car-ramming attack and wounded two other soldiers. Several shooting incidents have also been carried out in the past week in the Ramallah area without causing any injuries.

Rabbi Itamar Ben Gal, who was murdered in a stabbing attack in Ariel, with his wife Miriam

Terrorist Ahmed Jarrar. Waves of admiration on the Palestinian street

The shooting attack carried out by a Hamas cell from Jenin, which left Rabbi Raziel Shevah dead, was met with waves of admiration on the Palestinian street for terrorist Ahmed Jarrar. Terrorist Abed al-Karim Adel Assi, who murdered Rabbi Itamar Ben Gal and managed to hide in Nablus for more than a month, was finally captured early Sunday.

The current tensions could be joined by several variables, which are slowly converging and will keep converging in the coming days and weeks:

These variables have begun converging, and it’s too early to tell where each and all of them are going to take us. We are facing a particularly explosive series of events in a relatively short timeframe which might ignite the fuse, and that’s exactly what Hamas is hoping for.

It’s important to remember, however, that the equation is being curbed by some factors, starting from the defense establishment’s smart distinction between the Palestinian population and the terrorists and instigating elements to the accurate activity of the Palestinian security apparatuses, which is constantly taking place under the radar—now more than ever—in light of the public Palestinian criticism against the security coordination. Will this activity suffice this time?