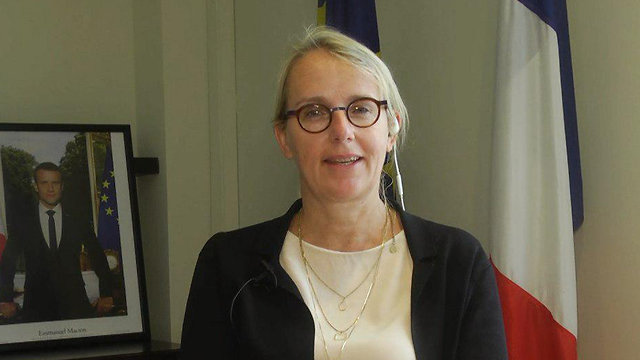 French ambassador: 'US withdrawal from Iran nuclear deal may lead to war'

France's Ambassador to Israel Hélène Le Gal commented Thursday on the Iranian nuclear deal, whose future is now in jeopardy, saying, "If the United States withdraws from the deal, I think Iran will as well and will immediately resume its nuclear program." Speaking at a Ynet studio interview, the diplomat spoke on the matter on the backdrop of the Washington visit of French President Emmanuel Macron, where he lobbied US President Donald Trump to not withdraw from the deal signed by his predecessor Barack Obama and other world powers and Tehran. In the interview, Le Gal equivocated as to whether Macron was successful in convincing Trump. "They have a very good relationship," she said. "They had a very long discussion about a number of issues, and the issue of Iran, of course, was very important."

"What the president (of France) said to President Trump is that we are not naïve about Iran. I don't know what President Trump will do in the weeks to come, but at least they had the occasion to discuss (these issues) very thoroughly," she added.

Speaking in broader terms, Ambassador Le Gal opined that, "The nuclear deal prevents Iran (from launching) a military program until 2025. If the nuclear deal is canceled, Iran will immediately restart its program. We need to prevent Iran from having nuclear weapons. We don't want Iran to have nuclear weapons—not now or ever." Asked what the consequences of such an American withdrawal could be, Le Gal said she feared "huge consequences. I don't think Iran will stay in the deal if the US goes out. The possibility of war exists." On the possibility that the JCPOA (Joint Comprehensive Plan of Action) agreement may be too problematic, Le Gal replied, "We are working on implementing the deal very toughly," adding that all of the deal's conditions will be implemented to prevent the Islamic republic from attaining nuclear weapons even after the deal concludes.

President Macron (L) lobbies President Trump to stay in the deal (Photo: EPA)
Speaking on a different matter next, Le Gal was asked which concrete actions France should take to defend its Jewish population, in the wake of anti-Semitic attacks in the French republic recently and Macron's statements that the country will not be the same without its Jews. Le Gal countered by saying, "We are taking a lot of actions, both in the field of the physical protection of places like synagogues or schools, but also improving our legislative system to punish those who (commit) anti-Semitic acts. We are very, very tough on this and are very concerned about the level of anti-Semitism in France and in the world in general." The interviewer claimed anti-Semitism had been on the rise in France in the past few years, an assertion Le Gal unequivocally rejected. "No, it's not on the rise," she stated. "The last two years, we have been counting very precisely. It has gone down the last two years, but it's still too high and we have to work a lot on it."

Despite the anti-Semitic murder of 85-year-old Holocaust survivor Mirelle Knoll, the ambassador said anti-Semitism was not on the rise in France
"There has been a violent murder (referring to the murder of Holocaust survivor Mirelle Knoll last month—ed), and the murderers have been arrested and will go to trial," she added. Ending on a happier subject, Israel and France will be celebrating the "France-Israel cross-cultural season" from June to November. The event is being held in honor of Israel's 70th Independence Day, the ambassador said, adding that it will be a cultural event that will also touch on economy and science. All told, some 180 different events will be held in both France and Israel together in the aforementioned months, to present the "more modern, contemporary side of our culture," the ambassador concluded.