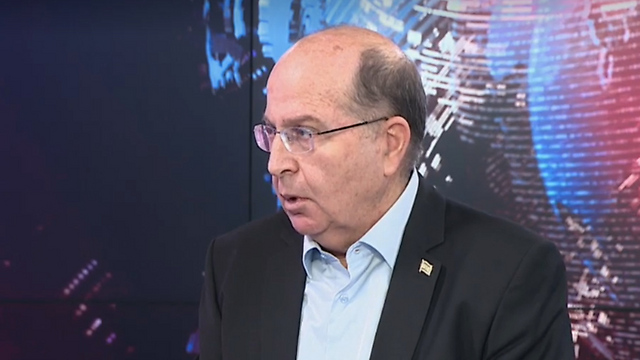 The former defense minister tells Ynet that while results of latest Israeli strikes in Syria are positive, they are not certain to deter Iran from further action; former senior officer Amiram Levin adds Israel should have undertaken a more circumscribed strategy on Iran; 'If Iran entrenches on Syria-Iraq border, will we attack then too?' he wonders.

Former Defense Minister Moshe Ya'alon said Thursday that while Wednesday night's strikes in Syria were successful as far as Israel was concerned, they might not be enough to deter the Iranians from opening a front against the IDF in the Golan Heights.

"The results of this night are definitely good for Israel," he told Ynet. "I hope the Iranians assess the situation and realize they shouldn't try to open a front against us. In general, the Israeli policy against Iran's belligerent attempts at entrenchment is the right policy."

According to Ya'alon, this was not the first time the Iranians have tried to open a terror front against Israel from the Golan Heights.

Fmr. defense minister and IDF chief of staff Ya'alon had doubts as to the efficacy of the Israeli strikes, but said they were nevertheless warranted

"It happened in the past, in 2015. They used proxies, and did not stop until those three proxies were gone," the former defense minister said. "Only then did they realize that the IDF has an intelligence advantage, that their actions are transparent to us and that we have the ability to deal with them, so they stopped."

Ya'alon continued, "They only resumed that activity recently, in February, with their attempt to infiltrate Israel with a drone. That was thwarted too. The IDF destroyed many of the targets of the threatening Iranian entrenchment in Syria, and they failed to implement what they wanted to do, whether as a result of their recklessness or as a result of the Iron Dome's ability to intercept their rockets. They paid a heavy price here. I'm not sure it will end there, but I certainly hope they have learned their lesson."

Maj.-Gen. (res.) Amiram Levin, former GOC Northern Command, iterated his belief in a separate interview that Iran will indeed take a step backwards following the Israeli strikes overnight, but stressed the overall conflict with the Islamic republic was far from over.

"First and foremost, the Iranians are shocked with Donald Trump's decision (to withdraw the US from the nuclear deal—ed). They are weak economically and militarily and the IDF—unlike them—has prepared itself well, with intelligence, the air force and other forces, but that all has to do with short-term tactics," he said.

Maj.-Gen. Levin said Israel's strategy on Iran should be more limited in scope (Photo: Avi Moalem)
"In the longer term, Iran is an enormous country—both size- and population-wise—and it is geographically distant. It has Hezbollah in Lebanon. We have opened a front against Iran, and things are much more complex now," he opined. "I presume Iran will take a step backwards. It can plainly see it's failing, and can't penetrate Israel with its rocket due to proper preparations (on Israel's part)," the former senior officer said. "It doesn't have outstanding assets on the Syrian side. What it does have are time, patience and size." He continued, "I think Israel's strategy, which (Prime Minister Benjamin Netanyahu) has adopted from the get go—to try and push Iran out of all of Syria—was misguided. A strategy of limited goals would have sufficed. "To determine—both in military action and in coordination with (Russian President Vladimir) Putin and the US that Iran won't cross farther west than the Suwayda-Damascus road, Putin could have stomached that, as could Iran. But what happens if they entrench on the Syrian-Iraqi border. Will we attack then as well? Where do we draw the line?"

The Iranian vehicle targeted by the IAF (Photo: IDF Spokesperson's Unit)
Another former IDF official, Lt.-Col. (res.) Miki Segal, who headed the Iran branch of Military Intelligence Directorate's Research Department, spoke about the matter as well, saying, "There is a clear message to the Iranians here—that so long as they are in the Syrian arena, they will continue being hit with such attacks." "It should be said this is only one facet of the overall campaign Israel is waging against Iran, whether it's against the nuclear program, its presence in Syria and Lebanon or anywhere else Iran endangers Israeli interests," he explained. "As long as there's intelligence indicating there's still an Iranian presence in Syria that may threaten Israel, these kinds of strikes will continue, as will combating Iran on the strategic and tactical fields," he added. "The Iranian public is very enlightened and smart," Lt.-Col. Segal claimed. "This is a people with a glorious history, and residents are well aware of the goings-on in Syria and Lebanon, and are aware of Iran's exploits throughout the world." "That's reflected in Iranian social media, which touch on both Iran's supposed accomplishments and its failures in Syria. They are exposed to international media, and Arab media, and are entirely aware of the price the Iranian people keep paying for its regime's misadventures abroad," he continued. "After the previous strike on the T-4 Airbase, which was attributed to Israel, dissenting voices were raised in Iran on two fronts, calls for revenge since more than seven Revolutionary Guards operatives were killed but also calls saying, 'No to Syria, no to Lebanon, no to Gaza and no to Palestine,'" Segal concluded.