Netanyahu and Modi in Israel 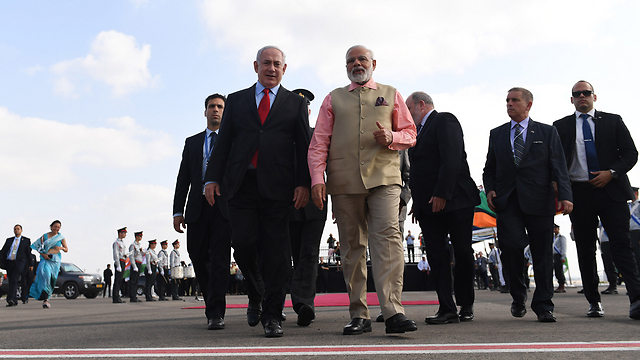 New Delhi's vote against US recognition of Jerusalem will not put a damper on the Israeli PM's visit to India, as he is set to lead a massive business delegation, sign a series of bilateral agreements, and even try to woo Bollywood.

Prime Minister Benjamin Netanyahu will travel to India on Saturday night for a six-day visit as a guest of Indian Prime Minister Narendra Modi.

Netanyahu and Modi during the Indian PM's visit to Israel in July (Photo: Shaul Golan)
Half a year ago, the Israeli government decided to invest NIS 240 million by 2020 in promoting ties with India in a variety of fields, including defense, tourism, agriculture, cyber advancements, culture, water, innovation and technology. Netanyahu, who will be joined by his wife Sara and son Yair, will be the first Israeli premier to visit India in 15 years. His visit comes after Indian Prime Minister Modi's visit to Israel in July 2017. Gilad Cohen, who heads the Asia and Pacific Department in the Foreign Ministry, said the close personal relations between Netanyahu and Modi have influenced public opinion in India, with social media in the country showing warm and positive reactions to Netanyahu's upcoming visit. "We're discussing strategic partnership between the two countries on all levels," Cohen added. Netanyahu's visit to India comes three weeks after New Delhi voted in the UN against US recognition of Jerusalem as Israel's capital, after facing great internal pressure from its 200 million Muslim citizens and external pressure from Arab and Muslim nations with whom it has diplomatic ties. While India values its ties with Israel, it also did not wish to burn bridges with the Arab and Muslim world, and New Delhi sought to send out a message that its friendship with Israel doesn't come at the expense of its friendship with the Arab world and the Palestinians.

Israel was disappointed by the Indian vote, but opted not to press the matter, so as to not cloud Netanyahu's upcoming visit.

"I would have genuinely preferred another vote, but it did not affect the flourishing relations between our two countries. Everyone can see it," Netanyahu said Wednesday.

Israeli officials also noted the improvement in Israeli-Indian ties, after several decades ago Indian passports included a ban on visits to Israel. "The relations with Russia, for example, are very good, but it never voted in our favor at the UN. So should we cut ties with it? There's a variety of interests. It's clear we don't like this, and the message has been conveyed," one official said. Another issue clouding the visit was resolved at the very last moment. The Indians have recently backed out of a $500 million deal with the Israeli defense company Rafael Advanced Defense Systems Ltd. to purchase Spike missiles. But recent reports indicate that the Indian Defense Ministry is now reconsidering the deal after facing pressure from the Indian military.

Netanyahu will be accompanied on his trip by 130 businessmen, making it one of the largest delegations the prime minister has led on a state visit. The delegation, along with Netanyahu, will attend a series of events, including two business seminars, tours of Indian corporations, a meeting with start-up entrepreneurs, and launch events for various business cooperation projects.

The Israeli premier is also not coming empty handed. He will make a gift to his Indian counterpart of a mobile water desalination unit, which the Israeli Foreign Ministry purchased for NIS 400,000. During Modi's visit to Israel, he and Netanyahu took a barefoot stroll together on an Israeli beach, and drank from the water produced by the desalination unit.

Netanyahu and Modi talk a walk on the beach during Modi's visit to Israel in July (Photo: Kobi Gideon, GPO)

The visit begins in New Delhi where Netanyahu will have dinner with Modi and meet with Indian Foreign Minister Sushma Swaraj.

The following day he will call on President Ram Nath Kovind then have more talks with Modi. Netanyahu will bring to his meeting with Modi 11-year-old Moshe Holtzberg, whose parents were murdered in a terror attack at the Mumbai Chabad House in 2008.

This will be the first time Moshe returns to India after losing his parents Rabbi Gavriel Holtzberg and his wife Rivka in the attack and surviving it himself only thanks to his Indian nanny, Sandra Samuel. The nanny will also join the trip along with Moshe's grandfather Rabbi Shimon Rosenberg, grandmother Yehudit, and the psychologist who has been treating him since the attack.

Wednesday sees him joining Modi on a visit to the Indian leader's home state of Gujarat, where Netanyahu and Modi will participate in a series of events on agriculture, innovation, entrepreneurship and water.

On Thursday, Netanyahu will host a business seminar and meet with top Jewish businessmen in India.

He will then attend two memorial ceremonies commemorating the 2008 Mumbai attacks, which claimed the lives of more than a 160 people during a 60-hour siege of the city. One service will be held at the Taj Mahal Hotel, and another at the Chabad House, where Moshe Holtzberg's parents were murdered along with four others.

The visit will conclude with an event titled "Shalom Bollywood," where Netanyahu will meet with the heads of the Bollywood film industry in an effort to bolster Israel's positive image in India and its ties with Bollywood and the Indian media.

Netanyahu will encourage the Bollywood heavyweights to film movies and videos in Israel, as well as purchase Israeli TV formats.

Amitabh Bachchan, a 75-year-old Indian superstar who has tens of millions of fans worldwide and even a temple dedicated to him in Kolkata, has confirmed his attendance to the event. He told the Israeli consulate in Mumbai that he's been corresponding with friends in Israel and greeting them with "Shabbat Shalom" in Hebrew.

A new Israel image video will debut at the event, featuring the views and potential filming locations in the Holy Land.

Ahead of Netanyahu's visit, Israel and India have agreed to significantly ease restrictions on Israeli visas to encourage Indians to visit the Holy Land. Indian tourists will be able to use a VIP track for a speedy visa to Israel, given 48 hours ahead of the visit.

Indian businessmen, meanwhile, will enjoy a visa for five years, rather than the one-time entrance visa they've received so far, while Indian diamond dealers will receive a visa for up to three years - an issue of personal importance to Modi. Innovation and foreign expert visas to Israel will be issued to Indians in an accelerate process as well.

At present, Israel sees some 47,000 Indian tourists a year. Israel is hoping the filming of Bollywood movies or music videos in the country would lead to a spike in visitors from India.