Explosion first major terror attack in India since Mumbai attacks in 2008; Israeli Tourism Minister Misezhnikov, who is visiting India, held meeting at a hotel located eight kilometers from scene of the attack

A bomb apparently hidden in a suitcase exploded Wednesday morning outside a crowded gate leading to the High Court in New Delhi, killing ten people and wounding 45 others, officials said.

The blast, which erupted shortly after 10 a.m., was the first major terror attack in India since a string of bombs exploded in three busy Mumbai neighborhoods on July 13, killing 20 people. Suspicion for those attacks fell on the shadowy extremist network known as the Indian Mujahedeen, though no one has been arrested.

The Israeli embassy in India said that it does not have knowledge of any Israelis that had been hurt in the explosion. 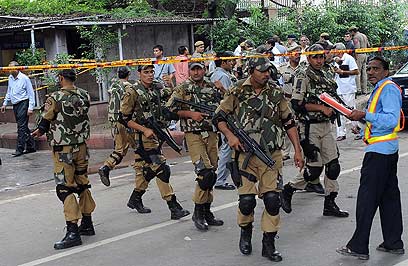 However, the embassy said that Israeli Tourism Minister Stas Misezhnikov, who is visiting India, held a meeting with ambassador to India Alon Ushpiz at a hotel located eight kilometers from the scene of the attack. The minister told Ynet that the attack proved that terrorism was a global phenomenon.

The government rallied Indians to remain defiant in the face of such attacks.

"We will never succumb to the pressure of terrorists," Prime Minister Manmohan Singh said during a visit to neighboring Bangladesh. "This is a long war in which all political parties and all the people of India will have to stand united so that this scourge of terrorism is crushed."

The bomb Wednesday exploded near a large crowd of people waiting in line at a reception counter where passes are made for entry to the court building.

The explosion shook the courthouse, sending lawyers and judges fleeing outside, said Sanjiv Narula, a lawyer who was in the building.

"There was smoke everywhere. People were running. People were shouting. There was blood everywhere. It was very, very scary," said Sangeeta Sondhi, another lawyer, who was parking her car near the gate when the bomb exploded. 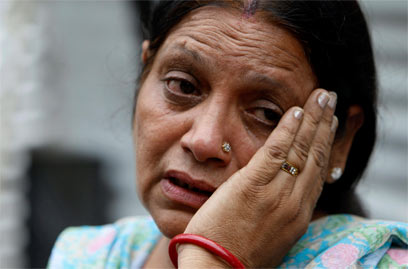 People ran to the blast site to assist the injured, piling them into auto-rickshaws to take them to the hospital.

"It appears that the bomb was in a suitcase because we have the remains of that suitcase," Home Secretary R.K. Singh told CNN-IBN television. The blast killed nine and wounded 45 others, he said.

There was no immediate claim of responsibility.

The High Court is an appeals court below India's Supreme Court.

Ambulances and forensic teams rushed to the scene, along with sniffer dogs and a bomb disposal unit, apparently checking for any further explosives.

The blast was the second explosion at the High Court this year. On May 25, a small explosion that appeared to be a failed car bomb erupted in the court parking lot.