Clinton: Road to Palestine does not run through UN

VIDEO - US Secretary of State Hillary Clinton said on Tuesday that the path to a two-state solution creating a Palestinian state beside Israel runs through Jerusalem and Ramallah, not through New York.

Speaking at a news conference, Clinton repeated the US view that the Palestinians should not seek full membership in the United Nations later this month and instead should resume direct talks with the Israelis. 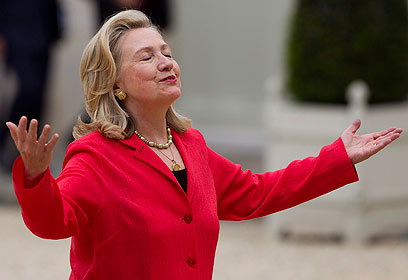 Clinton. Seeking conducive environment to direct talks (Photo: EPA)
"We need an environment that is conducive to direct negotiations," she said. "We all know that no matter what happens or doesn't happen at the UN the next day is not going to result the kind of changes the United States wishes to see that will move us toward the two state solution that we strongly support. "The only way of getting a lasting solution is through direct negotiations through the parties and the route to that lies in Jerusalem and Ramallah not in New York.

"So instead, we are redoubling our efforts with not only both sides but with a broad cross-section of the international community to create a sustainable platform for negotiations that can produce the two state solution that we seek within the framework that President Obama laid out last May."

Fatah Central Committee member Mohammed Shtayyeh said the Palestinian leadership would listen to any proposals but suggested the current US push had come too late.

"We are open-minded to any proposal. And we are ready to engage with any proposal. But this is not a step to really stop us from going to the United Nations," he added. "If the whole idea of a proposal is to engage peacefully then you don't really bring it in the last five minutes of the hour."