Did President Obama's positions on Israel cost him a seat in the House? The Republicans have scored an upset victory in a House race that started as a contest to replace New York Rep. Anthony Weiner, who was forced to step down following a sex-texting scandal, but became a referendum on US President Barack Obama's policies.

According to the New York Times, Turner took advantage of the discontent among the Jewish community with Obama’s policy toward Israel and his conduct pertaining to the Middle East peace process. 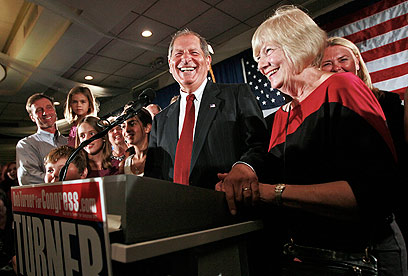 Former Mayor Ed Koch, a Democrat, endorsed Turner in July as a way to "send a message" to Obama on his policies toward Israel. And Weprin was challenged on his support of a proposed Islamic center and mosque near the World Trade Center site, in lower Manhattan.

The heavily Democratic district, which spans parts of Queens and Brooklyn and is 40% Jewish, had never sent a Republican to the House. The race was supposed to be an easy win for Democrats, who have a 3-1 ratio registration advantage in the district.

A number of voters who spoke to the New York Times said that the Israel issue played a major role in their decision to support Turner, who was repeatedly critical of Obama on the subject of his policy towards Israel.

Turner, a 70-year-old Catholic, vowed to push back on Obama's policies if elected. He received help from prominent Republicans including former Mayor Rudy Giuliani, whose much-praised stewardship of the city after the September 11 terror attacks was recalled during their 10th anniversary, last weekend.

The fact that Israel was an issue in the campaign came as a surprise, the Times reported, because Weprin is an observant Jew and avid supporter of Israel.

Orthodox Jews, who tend to be conservative on social issues, expressed anger over Weprin's vote in the state Assembly to legalize gay marriage. In July, New York became one of six states to recognize same-sex nuptials.