Amina Mona to be released

Shalit deal to include 1,027 security prisoners

First phase will see 450 prisoners freed, including 280 serving at least one life sentence; Israel scores major victory as nearly all top Palestinian terrorists will not be released including Marwan Barghouti, Abdullah Barghouti and Ahmed Saadat

1,027 Palestinian prisoners will be released in the framework of the prisoner exchange deal between Israel and Hamas that would bring IDF soldier Gilad Shalit home.

Speaking to reporters on Tuesday night, Shin Bet chief Yoram Cohen said that in the first phase of the swap, Israel will release 450 prisoners. Two months later, Israel will choose an additional 577 prisoners it wants to release.

All Palestinian female prisoners held in Israeli prisons are included in the list of 450 including Amina Mona, a young woman who lured a lovestruck Israeli teenage boy by the name of Ophir Nahum to a Palestinian city over the Internet, only to have him killed by waiting terrorists. 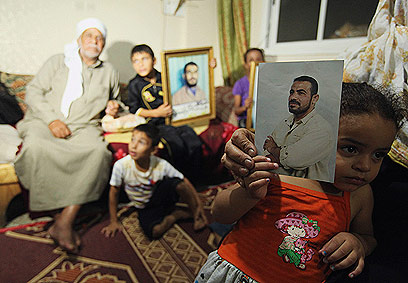 Israel will release 110 prisoners to the West Bank (14 to east Jerusalem) while 131 will return to their homes in the Gaza Strip.

Of the 450 prisoners to be released in the first phase, 280 are serving at least one life sentence.

However, Israel scored a major victory as nearly all top Palestinian terrorists will not be freed in the exchange, including:

According to Cohen, "It is a hard deal to digest for the families who lost their loved ones, but we cannot wait. If we do wait, we may not be able to bring Gilad home."

Cohen said that over the years, Hamas presented a very tough stance during negotiations, preventing a deal from being reached.

However, the Shin Bet chief added, Hamas began to change its tone in June "in two central parameters: first, it agreed for the first time that the arch terrorists would not be released and that the number of prisoners to be released to the West Bank would be reduced to a number that we could digest. We finalized the lists on Tuesday morning."

Israeli groups representing terror victims' families have voiced their objections to a prisoner exchange, saying it would be too painful to allow their children's murderers to go free.

Meanwhile, the Land of Israel lobby in the Knesset urged the cabinet to reject the proposed prisoner exchange deal. The National Union Party said the deal represents "Israel's capitulation of terror groups."