Amir Omar Hassan, 23, Norwegian tourist, by captors. Hassan to Egyptian press: 'There were hard days, but they didn't harm us'

The family of the kidnapped Israeli-Arab from Nazareth and MK Ahmad Tibi have reported that both he and the Norwegian tourist who where kidnapped last Friday in the Sinai Peninsula have been released into the custody of Egyptian authorities.

Before dawn, Amir Omar Hasan, 23, who was captured together with a Norwegian national by a group of armed Bedouins while vacationing in Sinai, called his family to inform them of his release.

The two are currently making their way to Cairo under the auspices of Egyptian officials. MK Ahmad Tibi thanked the Egyptian authorities for their valiant efforts to bring the event to a positive conclusion. 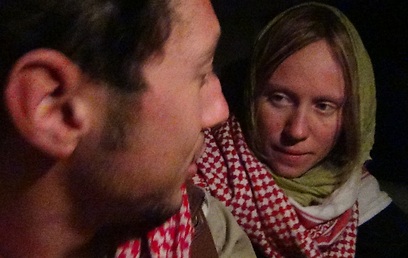 Halad Hassan, a lawyer and Amir's brother, spoke to Ynet and said: "At 5:30 in the morning I received a telephone call from my brother, who told me 'We've been released. I'm on my way to Cairo and from there I will return home.'"

The brother further added: "We're all glad they were set free. We have had a very difficult four days. We called everyone who we thought could help secure their release, and in the end these succeeded. I highly recommend that people not go to Sinai to travel, the place has become very dangerous."

Egyptian news agencies interviewed the two upon their release.

"These have been difficult and exhausting days, however, our captors never hurt us, and we received good treatment. We hope such incidents do not happen again," Hassan told the news agency. The Norwegian tourist, 32-year-old Ilgo Phillip who was in the cab with Hassan when the kidnapping took place said: "The kidnappers treated us well and gave us food and drink. However, we have been through a very difficult four days." She additionally expressed hope that Egypt would be a more hospitable place for tourists in the future. A relative of Hassan spoke to Ynet and said "I really want to thank all those involved in their release. The kidnapping put the family in serious psychological distress. I urge the Egyptian government to accept the kidnappers' demands regarding the release of their relatives so such incidents do not happen again." According to reports in Egyptian media, Hassan and the Norwegian were released with the help of mediators from the a-Tarabin Bedouin tribe in Sinai. A number of the tribe's leaders convinced the kidnappers to release the tourists in return for a commitment by the Interior Ministry to reexamine the case of their relatives, currently jailed in Ismailia. One of the captors told Egyptian news agency ONA: "We captured the tourists only after exhausting every possible legal option, including organizing a number of non-violent protests for our relatives' release, however, no officials took our pleas seriously, which left us no option but drastic measures." He further added that he did not harm the Hassan or Phillip, "we gave the hostages everything they asked for, and in accordance with the agreements made by our tribe leaders we agreed to release them both." Last Friday, Hassan was kidnapped after he traveled to Dahab. He took a cab to the Taba border crossing and a Norwegian woman, unknown to Hassan, also entered the vehicle.

When the cab neared the beach area of the peninsula it stopped, and under threat, Amir and the Norwegian were pulled out by Bedouins who informed the two that they were being kidnapped.