The ruins of this ancient complex sit on dunes by the sea, a world away from Gaza City's noise and bustle. Up in the sky, birds compete for space with children's kites flying from a nearby farm. St. Hilarion's monastery, a reminder of the time in late antiquity when Christianity was the dominant faith in what is now the Gaza Strip, is one of many archaeological treasures scattered across this coastal territory.
Royal Discovery
Archaeologists unveil King David's palace
Ynetnews
Royal storerooms also revealed in joint excavation of Hebrew University, Israel Antiquities Authority at Khirbet Qeiyafa, a fortified city in Judah identified with biblical city of Shaarayim
Archaeologists unveil King David's palace
But Gaza is one of the most crowded places on earth, and the rapid spread of its urban sprawl is endangering sites spanning 4,500 years, from Bronze Age ramparts to colorful Byzantine mosaics, experts say. Archaeologists, short of funds and unable to find sufficient trained local staff, say they are scrambling to find and protect the monuments. Some are left open to the weather. Others are engulfed by new development projects. "Archaeology in Gaza is everywhere," says French archaeologist Jean-Baptiste Humbert, who excavated in the territory from 1995 to 2005. He says it was once a "very rich oasis, with gardens, cities and you have settlements, dwellings, fortresses, cities everywhere, everywhere." The strip of land on the Mediterranean, sandwiched by Israel and Egypt, is now largely isolated, but once was a thriving crossroads between Africa, the Levant and Asia.

Today, about 1.7 million Palestinians are squeezed into about 360 square kilometers (140 square miles), an area roughly twice the size of Washington, DC. 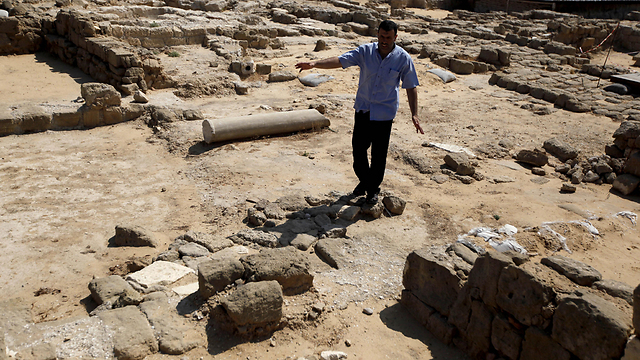 The need for housing is in Gaza greater than that for preserving ancient artifacts, said Humbert, who is affiliated with the Ecole Biblique, a French academic institution in Jerusalem.

Not only does the territory have a high birth rate, but since the Islamic terrorist Hamas group seized Gaza in 2007, construction has often been interrupted by shortages in building materials caused by border blockades enforced by Israel and Egypt.

The two-hectare (five-acre) monastery complex, known in Arabic as Tel Umm Amer, is believed to mark the birthplace of St. Hilarion, a fourth century A.D. Christian monk considered to be one of the founders of monasticism in the Holy Land. The site includes walls and foundations that are the remains of two churches, a cemetery, baths, a baptism hall and mosaic pavements. 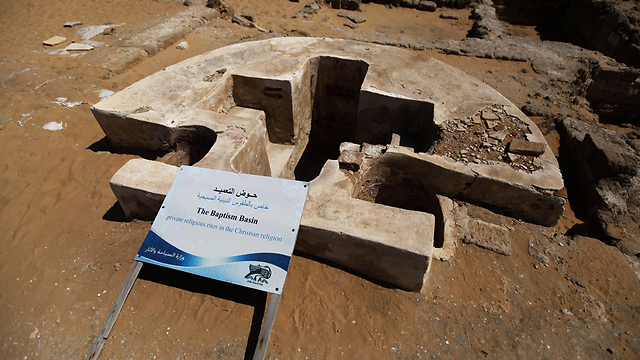 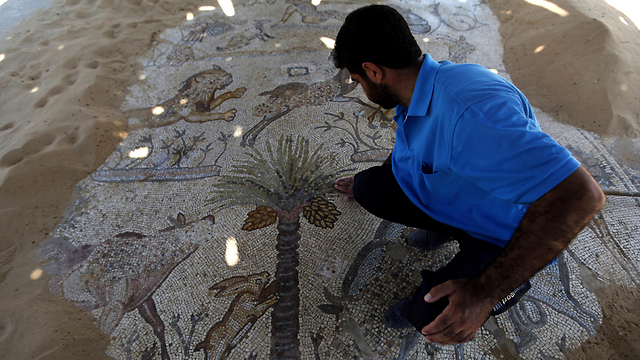 The ruins were uncovered in 1999, said Nabila Maliha, an archaeologist at Gaza's Ministry of Tourism and Antiquities. Now, local authorities have trouble preserving it. "We lack the capability, the support and the proper materials," she said.

Ecole Biblique, the UN cultural agency UNESCO and students from Gaza's Islamic University have tried to help. Preservation work includes covering the mosaic with a protective layer of sand, shoring up crumbling walls with sandbags and clearing weeds.

A shortage of trained local staff is a problem.

After Hamas seized Gaza from its political rival, Palestinian President Mahmoud Abbas , most of the civil servants at the time stayed away from their jobs. As part of the dispute between the two factions, Abbas' West Bank-based government only paid civil servants who did not work.

Employees hired by the Antiquities Ministry after 2007 don't have enough experience, said the deputy minister, Mohammed Khella, adding that some of the archaeological sites in Gaza are "in very bad condition." As a result of the border blockades, local staff had difficult leaving Gaza for training abroad. Even foreign help can only do so much, and an injection of money -- according to Humbert at least 35,000 Euros ($47,000) a year - is needed to preserve sites like St. Hilarion. UNESCO has given some money, but "funds needed to complete the emergency measures to put the site in safety are not available," said Junaid Sorosh-Wali, from the Ramallah office of UNESCO, the office responsible for the works in Gaza. Another site, called Jebaliyah, is located just 100 meters (yards) from a refugee camp of the same name, the largest of eight camps in Gaza. Here, Humbert is trying to shield a Byzantine mosaic pavement dating back to the sixth century. But the concrete shelter that would protect it from the weather will cost $75,000 and the archaeologist is still looking for funding. The Jebaliyah mosaic pavement is part of what once was a Byzantine church located on the road from Gaza to Jerusalem. Weather can also contribute to a site's demise, such as at Tel Es-Sakan in central Gaza. It was excavated in 2000 by French universities and contains the oldest rampart ever discovered in the Middle East, dating back some 3,500 years, Humbert said. But once uncovered, the mud bricks were exposed to rain and the walls started to vanish. Today, only a few remnants still exist. The biggest threat to Tel Es-Sakan, however, was the construction of a branch of the Palestine University in 2008 that eventually brought about the destruction of one-fourth of the site, said Humbert. An official at the university said that it received full approval from the government before starting construction, and that the building was monitored by the municipality. He spoke anonymously as he had no authorization to talk to the media. Despite the challenges, the local antiquities authority has conducted its own excavation, at Tel Rafah along the border with Egypt, for the past three years. The site is believed to correspond to a Roman-era city where coins, jars, tools and animal remains have been found. Humbert estimated that several dozen more archaeological sites are "buried under the sand" in Gaza. New discoveries are made all the time as buildings are being constructed, he said, but residents only report finds to the authorities in some cases. Gaza only has a handful of museums that can help connect the residents and their heritage. The ministry runs the public Qasr al-Basha Museum, while construction company owner Jawdat Koudary runs a private one.

But for the time being, Humbert said, any archaeologist in Gaza "is like a mad man running here, running there, to check what is in the process of destruction."