Bibi, you're out of touch

Op-ed: As we sat at home in freezing cold, our prime minister sat there looking all smug and amused

Hello there, Mr. Prime Minister. I am writing this column on my cell phone because it's the only device I can operate at the moment. Let me tell you briefly what I'm going through so that you'll understand how inappropriate it was for you to joke about the situation on Saturday evening. I live in the Har Shmuel neighborhood in Givat Ze'ev. A one-minute drive from Jerusalem. A beautiful, rare neighborhood. Last Thursday, in the middle of the snow storm and in the middle of the night, the electricity suddenly went out. Since then I, my wife and our four children have been in a house without heating and without water.
Storm Failure
Written on ice
Sima Kadmon
Op-ed: How is possible that a storm considered a regular winter day in Europe leads to a multi-system failure in Israel?
Written on ice

In the State of Israel in 2013, a family goes to sleep in one bed on Friday night in order to warm up when it's minus several degrees outside. We didn't eat the Shabbat challah bread because the oven didn't work, and we couldn't even take a hot shower before Shabbat because the water froze in the pipe system and there's no water.

Mr. Prime Minister, at the end of Shabbat we took advantage of a one-hour intermission, when the power which dedicated technicians tried to fix across the country suddenly returned, to charge the device and receive updates on whether the situation was similar in other places. I was astonished to see a patronizing and arrogant, insensitive and detached prime minister. Even the electricity is not as disconnected as you are, prime minister. My children are trembling with cold, so am I, the last two bottles of water barely made it to the next morning. A hot shower has been out of the question since Thursday. 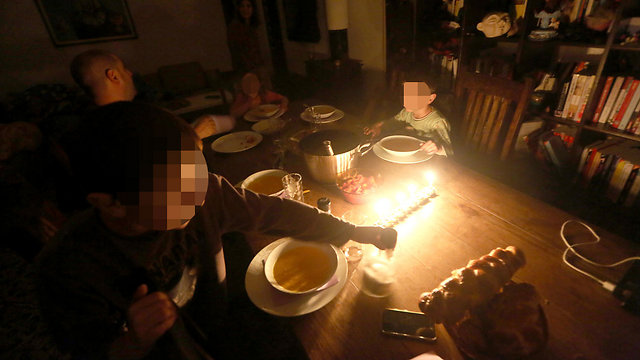 A different house in Jerusalem on Friday night (Photo: Gil Yohanan)
Mr. Prime Minister, I don’t blame you for the weather and I'm not asking you to come here and try to fix the power or take care of some products we are missing. But instead of sitting there looking all smug and amused, think about the women about to give birth in their homes without anyone to evacuate them, about the drivers who got stuck in their cars throughout a freezing night, about the children trembling with fear in the dark, about the ambulance drivers and brave volunteers drenched in snow in order to remove elderly and poor people from their leaky houses, about children with a high temperature and about people suffering from freezing cold. Instead of joking around, simply think about your people. Take the situation seriously because there are thousands of families like mine. Without water. Without electricity. Without heating. Without enough food and a way to get out of the house, and the last thing they want to see is a haughty and amused prime minister. In the house downstairs, a family is celebrating a circumcision ceremony today. Just imagine, Bibi, a six-day-old baby in freezing cold in an unheated house. That's the situation right now. You're welcome to come and see for yourself. In the house next door there is a 70-year-old man who asked me for an egg last night so that he could make himself an omelet because he ran out of food. The Har Shmuel neighborhood in Givat Ze'ev looks like a third world country, and you're talking about a successful management of an event? And yes, Bibi, without any demagogy. My house is about to run out of candles and I recall that you have a lot of candles in your home. I don't care if they're scented, I just need something to warm up my bedroom a bit. My daughter is covered with seven layers and is still complaining about being cold. I promised her that everything is being done in order to bring back the power supply. What should I tell her?

Yerach Toker is a media advisor in the ultra-Orthodox sector