The Al-Jazeera network reported Saturday that members of the UN Disengagement Observer Force stationed in Daraa in southern Syria are abandoning their posts and fleeing to the Israeli side of the Golan Heights. 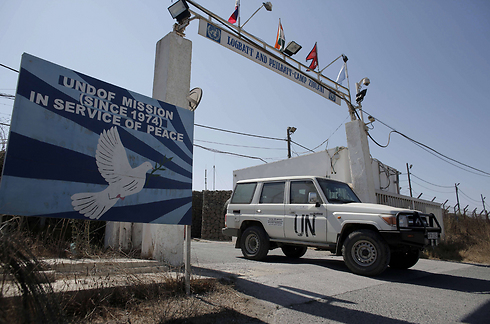 Philippine peacekeepers at one UN encampment were attacked, but those at another were "extricated," Defense Secretary Voltaire Gazmin told reporters in a series of text messages, adding that the attack started early Saturday Syrian time. 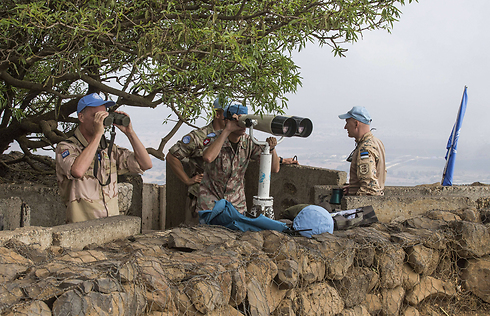 UN Peacekeepers use binoculars to watch the Syrian side of the Golan (Photo: Jack Guez/AFP)

Philippine military spokesman Lt. Col. Ramon Zagala told reporters, "There is an ongoing firefight, but all Filipinos are safe."

The UN did not say whether the 44 Fijian soldiers had been released, but a statement suggested progress was being made in negotiations to secure their freedom.

"The United Nations has received assurances from credible sources that 44 peacekeepers from UNDOF who were taken from their position... are safe and in good health," said a statement from the spokesman.

"UNDOF has not yet had direct contact with the peacekeepers." 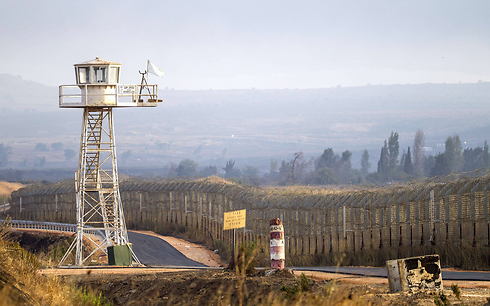 There were 40 Filipino troops in the encampment that came under attack, and 35 in the second, according to the Philippine military.

The Syrian rebels seized 44 Fijian peacekeepers on Thursday. The rebels then demanded that the 75 Filipinos manning two separate UN encampments 4 kilometers (2.5 miles) apart surrender their weapons, but they refused.

The situation of the peacekeepers, whose mission monitors a 1974 disengagement accord between Syria and Israel, remains "very, very fluid," the UN secretary-general's spokesman, Stephane Dujarric, told reporters Friday at the U.N. headquarters in New York.

The UN said in a statement that it had received assurances from credible sources that the Fijian peacekeepers "are safe and in good health." 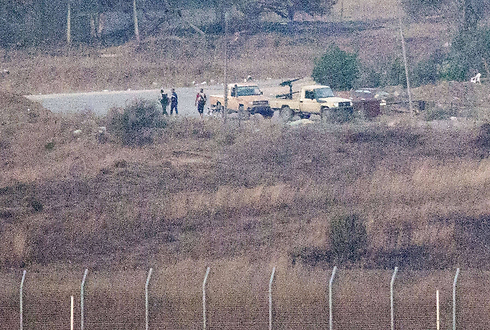 The statement added that they had been informed "the intention behind holding the peacekeepers was to remove them from an active battlefield to a safe area for their own protection."

In Australia on Saturday, Australian Foreign Minister Julie Bishop condemned the detention of the Fijian peacekeepers and called for their release.

"As a member of the UN Security Council, Australia demands the unconditional and immediate release of all the detained United Nations peacekeepers," Bishop said in a statement.

Bishop also said she assured them that Australia will use its position on the UN Security Council to maintain focus on this issue.

UN Secretary-General Ban Ki-moon also has condemned the detention of the Fijians and called for their immediate release.

The UN mission, known as UNDOF, has 1,223 troops from six countries: Fiji, India, Ireland, Nepal, Netherlands and the Philippines.

But the Philippine government said last week that it would bring home its 331 peacekeeping forces from the Golan Heights after their tour of duty ends in October, amid deteriorating security in the area. Various Syrian rebel groups have been engaged in intense fighting with the Syrian military in and near the Golan Heights.