EU can be Israel's new partner in fight against terror
Photo: AFP

New partners in struggle against terrorism

Op-ed: We in Israel join our Danish friends as they mourn terrible incident, but we also call on them to join us in helping to lead Europe and West in an uncompromising war on terrorism.

If there is anything we should avoid saying right now, when the Danish people are grieving over the terrorist attack and mourning its victims, it is remarks of the sort that have often been typical of us Israelis: “Now you’ll finally understand what we have been going through all these years, what we are experiencing, and why we must combat terrorism.”

At such a time, Israel's leadership should be transmitting a different message, one that is less confrontational and more inclusive: a message of partnership among democracies battling terrorism without sacrificing their democratic values. Such a campaign requires striking a balance between competing values, and steps that will minimize the violation of fundamental rights while guarding national security.

Denmark has already shown that it knows how to take drastic measures to safeguard its security. During the last decade, under its previous two prime ministers, Lars Løkke Rasmussen and his predecessor Anders Fogh Rasmussen, Denmark's immigration regulations have been amended and made more stringent several times over. Cameras and inspectors have been stationed at its borders, restricting the free movement of migrants who do not have a residency permit.

During his tenure, Lars Løkke Rasmussen was assailed for this by other members of the European Union, on the grounds that he is harming the vision of a “Europe without borders.” But he has remained firm, justifying his actions on national security grounds. 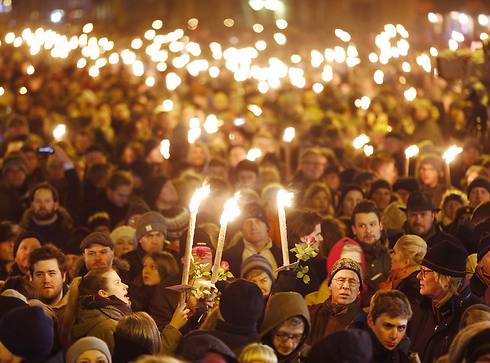 The Danish people must now serve as an example to Europe in another way: Denmark must encourage all the countries of the EU, and in fact the entire Western world, to establish a set of clear cut rules for democratic countries involved in the war on terror. In Israel we have been doing this for years, because we understand that military operations alone will never defeat terrorism.

An effective war against terrorism cannot be fought without a legal and moral defense, which is essential both for internal justification and to protect against external charges and suits that may be filed—and indeed are already being filed—with international tribunals such as the International Criminal Court in The Hague.

A democracy that delves deeply into these issues and tries to clarify them for itself encounters many dilemmas: Is administrative detention—also known as preventive detention—a legitimate tool? Israel employs this measure occasionally in the areas that may one day be part of a Palestinian state; but ought it also be exercised in sovereign territories?

Is it acceptable to deviate from regular procedures when the security services deem it essential? If so, to what extent? Can detention be extended beyond its normal duration?

When the conflict spirals into actual hostilities, the dilemmas that we know all too well become even more challenging: Should possible harm to innocent bystanders rule out military action? Is it legitimate to raid religious sites that are suspected of harboring terrorists or of serving as hotbeds of incitement?

Israel has been dealing with these questions for many years. Now France, Denmark, Britain, and Sweden are beginning to face the very same issues. The last Knesset made progress in drafting a comprehensive anti-terrorism law that includes guidelines for dealing with “supporting organizations”; however, it was not passed into law. The new Knesset will have to complete this legislation.

At the same time, the Knesset would be well advised to engage in a joint effort with our friends in Europe to enact laws and define norms that will meet international standards and that perhaps will be adopted by other countries as well.

We in Israel join in sympathy with our Danish friends as they mourn this terrible incident. But we also call on them to join us in helping to lead Europe and the West in an uncompromising war on terrorism, while holding on dearly to our most cherished, democratic values.

Yohanan Plesner is the president of the Israel Democracy Institute, home of the Center for National Security and Democracy, and the chairman of the Association of Friends of Denmark in Israel.