BEIRUT - The flow of European fighters from Europe to territory held by the ultra-hardline Islamic State is drying up due to tighter restrictions imposed by European states that have prevented would-be jihadis from travelling, fighters from the group said.

Fighters in Syria and Iraq contacted by Reuters said the impact was limited on the battlefield since European fighters make up only a fraction of the forces of Islamic State. "Now most of the (foreign) fighters are coming from Asian countries, like Tajikistan and Uzbekistan. They are tough fighters," an Islamic State militant who fought with the group in both Syria and Iraq, told Reuters via the internet. Some also said that restrictions might backfire on European countries when jihadis who are prevented from travelling to the Middle East are encouraged to wage individual attacks at home. European countries are working hard to reduce recruitment by the group, sometimes referred to by the acronyms ISIS or ISIL, which has seized wide swathes of Iraq and Syria and is now the target of a US-led campaign of air strikes.

The group takes pride in having attracted fighters from across the globe, including thousands from Europe. Western countries fear that some European fighters could return home and carry out attacks in their native countries.

Let Hezbollah and Islamic State destroy one another

The presence of European fighters drew particular attention in the West last year when a man with a British accent appeared in videos of British and American prisoners being beheaded. European countries have arrested people for recruiting for Islamic State. Several have passed laws allowing travel documents to be seized from those who travel to fight.

One Syrian supporter of the group said such measures were a sign that its importance was being recognized. "At first these countries took us lightly, they thought the fighters will come here and die. But what they did not see coming was that they get trained and also started to contact their friends and relatives to join," said the Syrian supporter who lives in an Islamic State-held territory. Islamic State is now stretched, waging battles on several fronts in both Iraq and Syria while trying to administer areas under its control. Fighters proclaiming loyalty to the group also have emerged in several countries including Libya and Egypt. Several members said the group fields 60,000 fighters in Iraq and Syria, mostly local Sunni Muslims. 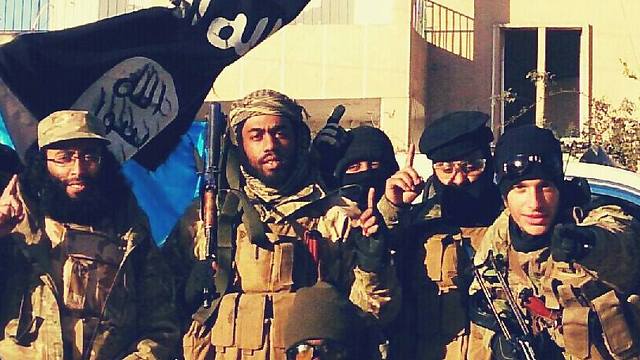 European members of Islamic State (Photo: Facebook)
About 550 German citizens have joined fighting in Syria and about 180 are believed to have returned, German officials have said. Germany plans to seize personal identity cards of would-be jihadis for up to three years according to a draft law. France has cracked down since mid-2014, ramping up a campaign after new anti-terrorism laws were passed by parliament late last year. French officials estimate that about 400 French citizens are in Syria, 180 have returned to France, 200 want to go and 200 are somewhere in Europe trying to get there. British officials think some 600 people have gone to fight, with 300 now returned. Police can now seize the passports of nationals trying to leave the country for up to 30 days, and can temporarily prevent citizens suspected of involvement with Islamic State from re-entering Britain. "This important legislation will disrupt the ability of people to travel abroad to fight and then return," Home Secretary Theresa May said in a statement.

Despite the crackdown, the group continues to receive fresh fighters through neighbouring countries. Several jihadi sources said that travelling through Turkey remains the main route.

Turkey has responded to strong criticism from Western allies alarmed at the flow of fighters into Syria by ramping up border controls, officials and diplomats have said. This month the Turkish army said at least 19 people intent on joining Islamic State had been detained close to the frontier, including 13 foreigners. "The impression we have is that Turkey has tightened things up," one western diplomat told Reuters. Anti-Islamic State activists inside Syria say there has been tension among the group with some members, mainly foreigners, fleeing. Fighters deny this. "The (foreigners) are not leaving the State. In two months in Baiji we received 180. In one of the training camps here forty percent of the fighters are foreigners," said a fighter who is now based in Iraq. Baiji, site of Iraq's biggest oil refinery, has been one of the main battlefields between fighters and Iraqi government forces. The group has had its eyes on Europe since it first appeared. In many of its videos, fighters declare that one of its targets is "Rome", by which they mean Christian Europe generally. It is now encouraging what it calls "lone wolves" to carry out attacks inside Europe. "If they cannot come here they still fight these infidels inside the countries they live in," a fighter who gave his name as Bakr said.