Event hosted by Nefesh B’Nefesh aims to help potential new immigrants to Israel make informed choices by participating in seminars and workshops and meeting with professionals from a variety of aliyah-related fields.

More than 1,200 people attended an aliyah mega event in New York City on Sunday, which was organized by Nefesh B’Nefesh (NBN) together with the Jewish Agency for Israel, Israel’s Ministry of aliyah and Immigrant Absorption Keren Kayemeth LeIsrael and JNF-USA, in a bid to help potential new immigrants to Israel make informed choices. 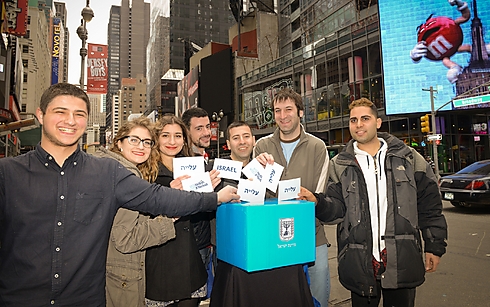 "In addition to the hundreds of students, professionals and retirees attending today’s event, it is impressive seeing so many medical professionals coming from all over North America expressing interest in making aliyah," said Nefesh B’Nefesh co-founder and Executive Director Rabbi Yehoshua Fass.

"Our aliyah fairs are a beneficial way for those contemplating moving to Israel to hear firsthand from an array of professionals, through tailored employment, social and educational sessions on how to build a plan for creating a successful aliyah."

To date, more than 50,000 North American and British Jews have attended Nefesh B'Nefesh pre-aliyah informational seminars throughout the United States, Canada and the United Kingdom, including tailored programs, events and individual counseling sessions.