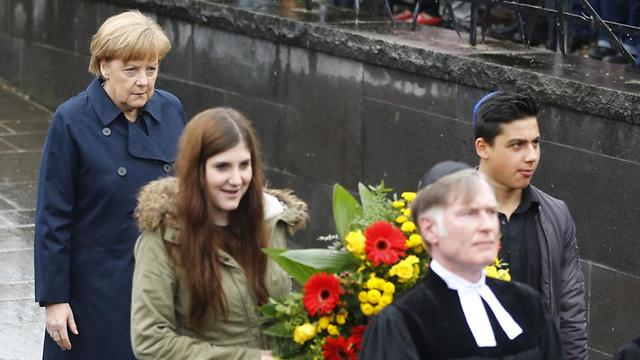 On eve of ceremony, German chancellor stresses her country's 'particular responsibility' and warns there is no question of drawing a line under history.

German Chancellor Angela Merkel joined survivors of the former Nazi concentration camp at Dachau Sunday for a solemn ceremony to mark 70 years since it was liberated by US forces.

American army trucks rolled into Dachau, northwest of Munich, on April 29, 1945 to discover the unspeakable horror that had led to more than 41,000 people being killed, having starved or died of disease.

Similar 70th anniversary commemorations have taken place at other former camps this year, beginning in January with Auschwitz in what was Nazi-occupied Poland, but Dachau is the only one Merkel has attended.

Under heavily pouring rain, the silence interrupted only by the tolling of the chapel bells, more than 130 survivors as well as former US liberators also took part.

Merkel, who will address the event shortly, and French former deportee Clement Quentin placed a wreath of flowers in front of the former crematorium. Josef Schuster, president of the Central Council of Jews in Germany, said Merkel's presence together with survivors was a "sign of solidarity." He called for the remembrance of the Holocaust to remain strong, warning that, with time, "distance grows, empathy diminishes" and urged the younger generation to uphold the "responsibility" of never forgetting. Former inmate Quentin told AFP in an interview recently that when the liberation of Dachau came, he was simply "waiting to die." "We were no longer normal human beings, we weren't yet animals, but only just," the 94-year-old former resistance member, who lives in western France, said. He also described being subjected to SS medical experiments during his 10 months at Dachau, with the camp's doctors infecting him with tuberculosis. US President Barack Obama paid tribute Wednesday to the more than 200,000 Jews, gays, Roma, political opponents, the disabled and prisoners of war who were imprisoned at Dachau from 1933. The Nazis opened Dachau as a concentration camp for political prisoners in March 1933, just weeks after Adolf Hitler took power. It was the first such site in Germany and served as a model for all the camps to follow.

On the eve of the ceremony, Merkel stressed in her weekly podcast message Germany's "particular responsibility," 70 years after the end of World War II and warned there was no question of drawing a line under history.

A blacksmith prepares a replica of the Dachau concentration camp gate at the main entrance of the memorial in Dachau (Photo: AP)
"We Germans have a particular responsibility here to handle what we perpetrated in the period of National Socialism attentively, sensitively and also knowledgeably," she said. In 2013 Merkel became the first German chancellor to go to the former Dachau camp but faced criticism for making the visit during the campaign for the 2013 general election ahead of a beer-tent rally for supporters. In an emotional speech at the time, Merkel said "the memory of the prisoners' fates fills me with deep sadness and shame." Last year she was awarded the General Andre Delpech Prize by an association of former prisoners at the Dachau camp, named after a former inmate. The iron gate to the former death camp which bears the chilling inscription "Arbeit Macht Frei" (Work Will Set You Free) has had to be replaced after the original was stolen by thieves from the camp's memorial last year. Last Sunday, German President Joachim Gauck paid tribute to Britain for liberating the Nazi concentration camp Bergen-Belsen 70 years ago and restoring "humanity" to the country.

The Allies were post-war "ambassadors of a democratic culture that did not pursue vengeance against the enemy," Gauck said.