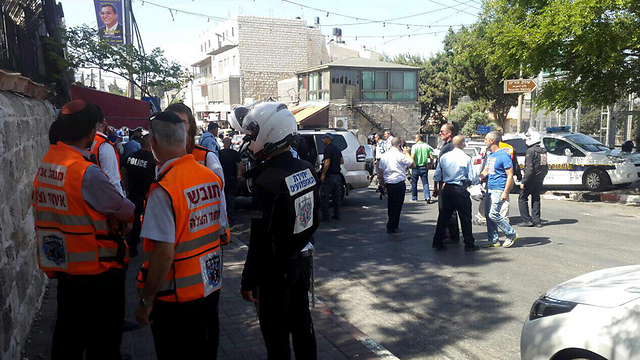 Two Border Police officers - a man and a woman - were wounded Wednesday morning in a vehicular terror attack in Jerusalem, on the ascent to the Mount of Olives.

The incident occurred at the At-Tur junction, a little before 10am. The terrorist was shot by police officers and died of his wounds a short time later. Palestinian sources later named him as Amran Abu Dhaim, 41, from the East Jerusalem neighborhood of Jabel Mukaber.

Site of the attack

The male officer was lightly hurt, and taken to Hadassah Medical Center in Ein Karem. The female officer sustained light-to-moderate wounds and was taken to Shaare Tzedek Hospital.

The driver had been traveling from the direction of the Augusta Victoria area, when he spotted the group of Border Police, who were conducting security checks.  He appears to have veered off the road towards the group in order to carry out the attack.

An initial investigation shows that the driver identified the group of police officers and tried to run them over. After the attack, he tried to "confirm the kill" by reversing back over the wounded officers. He was then shot by police.

Magen David Adom said that they had received a report of two wounded pedestrians who had been hit by a car in At-Tur. Paramedics who arrived at the scene delivered medical assistance to the two wounded women, who were then taken to hospitals in Jerusalem. The driver was also treated at the scene.

Bystanders hurtled stones at security forces as they arrived at the scene. There were also protests reported at the site.

In At-tur, residents said that the incident had been a traffic accident, an argument that has become a standard response to such attacks.

"The driver never tried or intended to run anyone over," said At-tur resident Mufid Abu Ranam. "He tried to overtake a car and his car skidded. And despite that, the police shot him."

The terrorist's brother, Shafik Abu Dhaim, rushed to the site of the incident. "I don't believe that he carried out an attack," he said. "This was surely an accident. He wanted to turn around and the police shot him."

He said his brother worked as a security officer for several Israeli transport companies. "He never talked of terror attacks and he never had any leanings of this kind."

Abu Dahim also confirmed that the terrorist behind the 2008 deadly attack at the Mercaz Harav yeshiva in Jerusalem had been a close relative.

Israel Police Commander Yohanan Danino spoke to the officer who shot the terrorist, and told him that, "the terror attack proves the we have to remain alert. I appreciate and am proud of the way in which you proved your professionalism and determination to prevent a murderous attack."

Following a situation assessment, Danino and the commander of the Jerusalem district police ordered an increase in forces both in the capital and population centers around the country.

Jerusalem commander Moshe Edri said that the incident was undoubtedly a terror attack. "A car traveling from the north identified a group of police officers and veered towards them with the intention of carrying out a vehicular attack," he said.

This is the latest in a spate of vehicular attacks by Palestinians against Israelis, many of them in Jerusalem. Last week, four people were wounded in an attack in the West Bank, close to the Alon Shvut settlement.