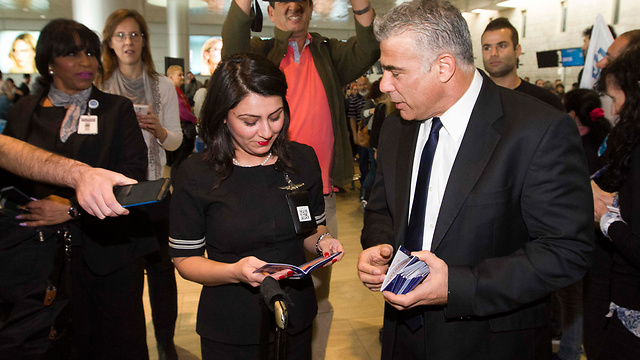 Yesh Atid MK Yair Lapid is counting on Israelis flying abroad to fight against BDS as part of a 'war in which we are all emissaries.'

MK Yair Lapid, the head of Yesh Atid, turned up at the main terminal of Ben Gurion Airport on Tuesday morning and distributed booklets to Israelis flying abroad, as part of the battle against the Boycott, Divestment and Sanctions movement. The booklets contain a list of arguments designed to be used in response to common accusations from the BDS movement.

"We need to tell the truth in the face of all the lies being spread," Lapid told travelers.

Yesh Atid head Yair Lapid at Ben Gurion Airport with Israelis about to fly abroad, distributing booklets on how to fight BDS. (Photo: Ido Erez)
"Israel is under constant attack from lies and mudslinging across the world," he continued. "We are launching a campaign today to protect the state and recruit its good citizens who are flying abroad.

"This booklet can fit into your pocket and contains responses that can defeat every claim. Every citizen will become an emissary and will protect Israel abroad. The time has come to answer back," Lapid added.

Yair Lapid talking to Israelis about to fly abroad (Photo: Ido Erez)
The booklets, which were given to passengers just before they dropped their luggage at airline check-in desks, are a type of instruction manual teaching Israelis how to refute the claims and lies of BDS activists. "We cannot abandon this field," Lapid wrote in the booklet's introduction. "Not everyone is an anti-Semite, not everyone is against us; we just need to explain our side of the story." "We have prepared a small booklet for you," the introduction continues. "For every lie that is being spread, we have written the truth. In this war, we are all emissaries."

The booklet, which was put together by a team of advocacy experts, features the central claims put forward by BDS activists and direct responses to refute them.

Lapid making his way through Ben Gurion Airport on Tuesday morning (Photo: Ido Erez)
Some of the claims addressed include the idea that the Israeli-Palestinian conflict is responsible for global terrorism; that Israelis don't recognize the Palestinians' right to a state and that Israel is an apartheid state with a separation fence. "The BDS movement spreads an unbelievable amount of lies about us, fabricated pictures and fictional witness accounts. The goal is to smear Israel's name in the world, to isolate us, to turn us into a hated and illegitimate state," Lapid continued in his introduction to the booklet.

A traveler reading a new booklet on how to answer back to BDS claims (Photo: Ido Erez)
"If we manage this struggle with determination and wisdom, we can win. But we all need to mobilize. We are Israelis. And when our house is under attack, we stand ready to defend it. It's in our genes. There is no right or left in this. When facing the outside world, we are united."

Lapid has been leading the line in the battle against BDS over the last few months, meeting with European and US officials, including community leaders and members of parliament.

Yair Lapid at the Saban Forum in the US
X

Yair Lapid at the Saban Forum in the US

He has also been heavily present in the international media, and has met university student groups across the globe in order to advise them on how to fight BDS. Lapid's office has said that following his global push, Israeli citizens have approached Lapid in search of materials and tools they can use to tackle BDS on social media and during trips abroad.