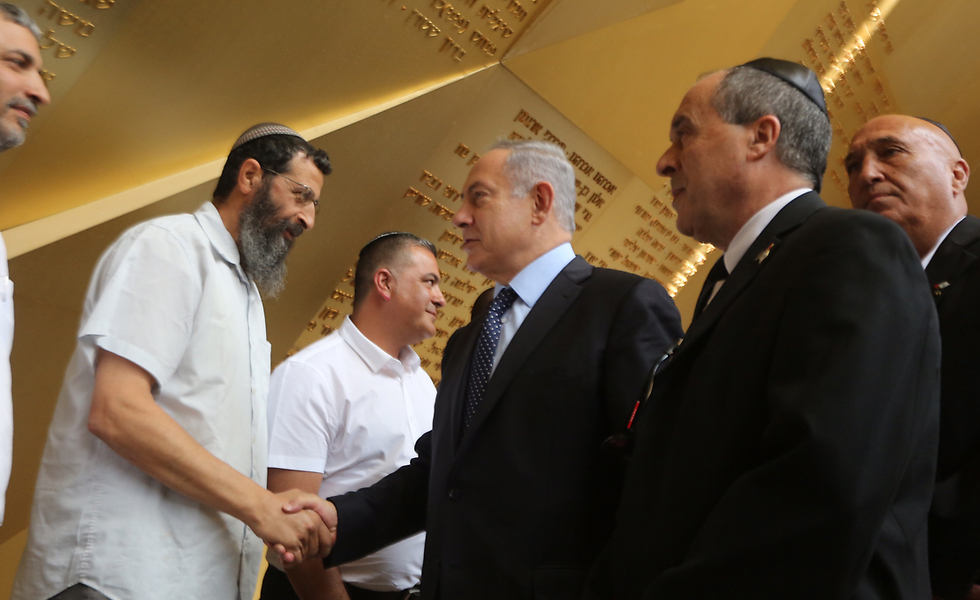 Netanyahu to bereaved families: Our soldiers died for Israel's independence

During ceremony to open Memorial Day events at Yad Labanim, prime minister speaks of his own loss of brother Yoni; Knesset Speaker Edelstein: 'We do not want to live by our swords. But, for now, our enemies leave us with no choice.'

Memorial Day for fallen IDF soldiers and terror victims began on Tuesday afternoon with a ceremony at the Yad Labanim center in Jerusalem. Yad Labanim is an Israeli organization that works to commemorate Israel's fallen soldiers and accompany the bereaved families.

In attendance were Prime Minister Benjamin Netanyahu, Knesset Speaker Yuli Edelstein and Jerusalem Mayor Nir Barkat, as well as many members of bereaved families and other dignitaries.

Prime Minister Netanyahu, who lost his brother Yoni in the Entebbe Operation, spoke of his own personal bereavement. "I, like you, carry the burden of grief, as we fall to the abyss of sorrow, agonize over the pain of loss. These feelings won't let go after you receive the news. When I received the news from my brother, and later delivered it to my parents, my whole world collapsed. The same happened to you," he told bereaved families.

But, the prime minister noted, there is hope and new life. "Today I spoke to the mother of Ben Vanunu, may he rest in peace, a handsome young man who was killed during Operation Protective Edge. His parents Sarit and Ilan welcomed a daughter into the world today."

Speaking about the reasons to this terrible price the families of the fallen soldiers have to pay, Netanyahu said, "They died for Israel's independence. Our sons and daughters go to battle because of a higher calling, and that is exactly the difference between an enslaved and beaten people, as we were up until 68 years ago, to a people that sits in its own land, and has control of its own destiny. But the price is terrible.

"Life in this generation of rebirth exacts a heavy personal and national price, but the spirit of our people is strong," he continued. "We will continue standing firm against our enemies, building our country and ensuring our revival. We will not lose hope of reconciling with our enemies, but we will first and foremost make peace amongst us."

Knesset Speaker Edelstein declared that "We do not want to live by our swords. But, for now, our enemies leave us with no choice. For that, we must keep the IDF a strong, advanced, ethical and moral army."

Prime Minister Netanyahu laying a wreath in honor of the fallen soldiers (Photo: Gil Yohanan)
The IDF, Edelstein noted, "was and remains 'the army of the people.' Not just because of the varied and all-Israeli nature of its soldiers, but also because it draws its strength from the people of Israel." The Knesset speaker stressed that "we provide and will continue providing the IDF's soldiers and officers with full backing as they deal, at any given moment, with very complex and sensitive challenges. This is the only way we could stand strong, armed and alert against terrorism and hatred. Because if we are not ready to face military and diplomatic threats - we will not be able to continue existing."

"In the song 'The Silver Platter,' written by Nathan Alterman in the midst of the first battles of the War of Independence, he described the horrifying, always tense, connection between the terrible price, the pain and loss of the many fallen in that war, and the joy for the independence of the new state. Almost 70 years later, Memorial Day and Independence Day are tightly bounded together in an unbreakable connection."

"As we walk and travel on the streets and in the neighborhoods of Jerusalem," the mayor said, "charmed by the breath-taking beauty of the eternal city, we are commanded to remember that every public park opened, every new kindergarten, every restaurant, cafe or function hall - all of these, and Jerusalem as a whole, were redeemed in the blood of our fallen soldiers. If it weren't for those brave and courageous soldiers, the heroes of glory - many of them buried not far from here on Mount Herzl - the State of Israel and its capital in Jerusalem would not have been founded, and the count of the Jewish people's exile would not have stopped at 2,000 years."

Barkat brought as an example Border Policewoman Hadar Cohen, who was killed in a terror attack at the Nablus Gate in Jerusalem after she and other Border Police officers shot dead the three terrorists, preventing them from harming civilians.

"As Jerusalemites, we could not have asked for more devoted, committed and braver soldiers than Hadar and her friends in the Border Police, as well as the other members of the security forces who vigilantly protect Jerusalem," he said.