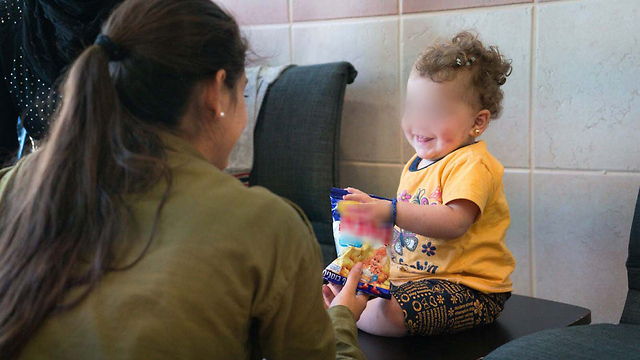 IDF helps hundreds of thousands of Syrians with 360 tons of food, 77 tons of clothing

IDF reveals amount of aid provided to Syrian refugees, with about half a million liters of diesel fuel, dozens of generators, and medical treatment for some 3,000 wounded Syrians within Israeli; 'We thank Israel, and with God's help, when there will be peace I will return here to kiss the ground in Israel,' says one Syrian refugee.

The IDF revealed Wednesday the scope of humanitarian aid that it helps provide the victims of the civil war in Syria. These efforts included transporting about half a million liters of diesel fuel, 360 tons of food, 77 tons of clothing and shoes, as well as dozens of generators and water delivery systems.

The humanitarian aid is provided to some 200,000 Syrian citizens living in 80 villages and towns in the Syrian Golan Heights and controlled by rebel groups not affiliated with ISIS. It is a strip of land 15 kilometers deep into Syria and 40 kilometers long, from the Syrian village of Jubta al-Hashib in the north to the Tal Saki area in the south-central region.

A Syrian toddler treated at IDF medical center set up for Syrian refegees (Photo: IDF Spokesperson's Unit)
About a year ago, the Bashan division of the IDF, which is in charge of the Golan Heights, decided to set up an organized humanitarian aid system, by erecting a special unit focused on this mission, headed by Lt. Col. A., who served in intelligence positions in the past, as well as in the Civil Administration in the Gaza Division and Judea and Samaria.

"We're going to be invaluable to the local Syrians," said Golan Division Commander Brig. Gen. Yaniv Ashur. "When other villages heard about the help we were providing, they also wanted to join in. In one of the villages, the aid from Israel received a religious seal of approval when the muezzin authorized alerted worshipers they can reach the border and receive help."

From the logistics center to the rebel-controlled villages

The items are stored in a protected logistics center near the border. From there they are transferred and placed on the eastern side of the perimeter fence and later collected by the Syrians.

"We are in telephone contact with people in the Syrian villages, including local doctors and village heads, but also with those involved in certain professions, such as electricity, to which we transmit generators," the IDF admitted for the first time on Wednesday.

Systemizing and streamlining the aid provided by the IDF to Syrian refugees is also reflected in the way the army communicates with the Syrians: For starters, the IDF speaks to the aid recipients directly and not through aid organizations or the UN. As such, flour is directly distributed to Syrian bakeries, and vehicles and mules are provided for transporting supplies.

"In my studies in Britain, before I took up this position, I learned about the military power that existed in providing 'soft means.' (In addition—ed), the IDF Military Intelligence Research Department explained to me how much the Americans failed to achieve in the war in Iraq, due to their not taking care of the local population."

IDF sources added: "One of the guiding principles here is maintaining continuity to create credibility on the other side. We supplied them with tons of flour, which reduced the price of bread by 50 percent, 80 percent. Once a week, a Syrian children's bus arrives at the border for a day of medical treatment in Israel, which also includes fun activities for children and providing clothing.

The aid project is funded mainly by foreign donations, with the IDF supplying some of the budget, mainly for the purchase of basic goods from the IDF food center and from funding the devices to the unit.

Baby formula for Syrian refugees (Photo: IDF Spokesperson's Unit)
Ashur noted that international aid organizations, such as the Red Cross and Doctors without Borders, have not been involved in the project, apparently over concerns that doing so would limit their activities in Turkey and Jordan.

"We found civilian donors like a wealthy Syrian expatriate who lived in Chicago, who provided donations through the Haifa Port. We're looking to help the local population grow stronger and see the Shi'ite axis and global jihad elements weaken," he explained.

Photo: Avihu Shapira
Ashur added: "This plan will not guarantee the prevention of attacks from the border but will help restrain the area. We will continue our policy of non-intervention in the war." There are currently two refugee camps near the fence, on the Syrian side of the border.

Military medical sources said that the assistance given to Syrian refugees has not come at the expense of Israeli patients in Israeli hospitals.

"In total, 3,000 Syrians have been treated so far, about 70 percent of whom are men (aged 20 – 30), in addition to 1,000 children who have been hospitalized for treatment and a respite over the past year. None of them have wanted to stay in Israel thanks to the assistance we provide their villages. We (also) supply insulin to one hundred Syrian diabetics. "

Photo: IDF Spokesperson's Unit
In two weeks' time, a new IDF clinic will be set up on the border with Syria, located in an old IDF post on the eastern side of the security fence. The IDF will provide the infrastructure, but the doctors, responsibility and funding will be provided by the US. This is in addition to the medical equipment transferred from Israel to the medical centers that were damaged in the Quneitra city area.

Syrian resident: 'When peace comes I will come to kiss the land of Israel'

The IDF's opinions differed as to whether to reveal the extent of the aid and the unit's activity. Following partial publications in the foreign media it was decided to officially address its aid efforts. In a video released by the IDF, a wounded Syrian man kisses the hand of a paramedic who treated him in an ambulance.

Other videos show interviews with Syrian residents who received medical assistance in Israel. One of the residents said: "We did not find any country that would stand by us except Israel, the soldiers treated us very well, they helped us in our area, took the wounded, treated them, gave them medicine."

A girl who received medical treatment in Israel was asked if she was afraid to enter Israel and replied, "No, they are treating me." When asked to describe life in Syria, she added: "Over there it's bad, not good. The summer is always bad."

Another Syrian resident added, "We thank Israel, and with God's help, when there will be peace in Syria I will return here to kiss the ground in Israel."

An Israeli hospital to be erected beyond fence with Syria

On a related note, it was reported on Wednesday that Israel is planning to establish a new field hospital along the demarcation line with Syria.

The new field hospital would be located on the Syrian side of the fence but on the Israeli side of the demarcation line in the Golan Heights, which it occupied in 1967, Lieutenant Colonel Tomer Koler said.

The fence does not always follow the line precisely.

Koler said he hoped it would be operational in the next month.

Israel formerly had a field hospital in the area but closed it in 2016.

Koler said that because of the humanitarian efforts, he hopes "that they will see that we are good people on the other side."