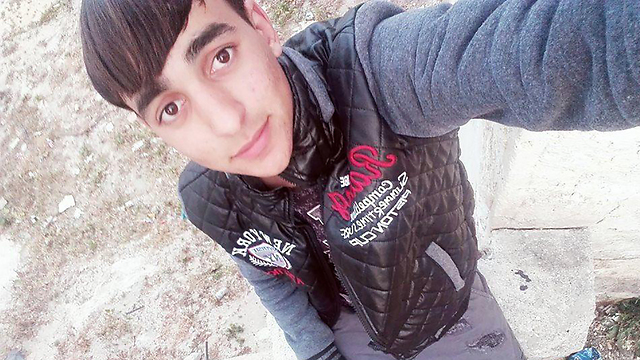 17-year-old Palestinian Zahran from the West Bank city of Tulkarm reportedly approached IDF Police unit, was told to stop and continue, before taking out a knife; he was shot and died shortly after; one police officer lightly wounded was taken in for treatement.

The terrorist who attempted to stab a Border Policeman on Saturday near Tapuach junction in the West Bank was shot and killed.

The terrorist was a 17-year-old Palestinian Qutaiba Zahran from the West Bank city of Tulkarm.

Zahran reportedly approached a group of IDF Border Policemen stationed at Tapuah Junction, holding what appeared to be a bag, Police Spokeswoman Luba Samri said, and the troops then called on him to stop.

The knife held by Zahran during the attack (Photo: Police Spokesperson's Unit)
"The suspect suddenly whipped out a knife and accosted one of the troops. Other troops then opened fire and neutralized the suspect," Samri said.

Zahran died shortly after being shot.

Following the attack MDA paramedics, with the assistance of an IDF medical force, provided medical administered treatment to the policeman, who was lightly injured in his leg during the attack.

The Palestinian Health Ministry confirmed the teenager had been killed. There was no other comment from Palestinian officials.