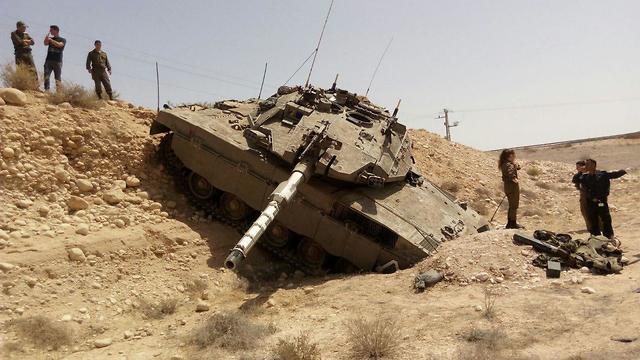 An IDF soldier was killed and three others were injured early Saturday in an accident involving a tank. Two of the injured were in serious condition. The accident happened near the Nitzana border crossing connecting Israel and the Sinai Peninsula, while a tank force from 74th Battalion of the 188th Brigade, under the command of the Caracal Battalion, was conducting routine operations in the area.

According to an initial investigation into the incident, IDF forces were called to the scene at around 1am to help thwart a smuggling after a previous attempt had already been foiled.

The smugglers were trying to sabotage security infrastructure, and tanks were called to the scene to stop them from using the smuggling attempt as cover for a terrorist attack.

As the forces were maneuvering, one Merkava Mark III tank moved towards one of the military posts when it rolled three meters down a slope at the Nitzana stream, even though according to the IDF the tank was supposed to be able to handle such an incline.


A blaze then broke out inside the tank, caused by one of its shells catching fire for reasons yet unknown. The tank's Spectronix fire detection system extinguished the fire, saving the lives of the three soldiers who were injured in the incident.

The tank driver was killed, but it is yet unclear if he died in the fire or as a result of the fire suppression materials. He was not hurt when the tank rolled down the slope.

In the wake of the incident, an investigation was launched by the IDF's criminal Investigation Division (CID), the army established an inquiry team, and the Southern Command and 188th Brigade launched their own probes as well.

The injured soldiers were taken to the Soroka Medical Center in Be'er Sheva for treatment, with an IDF statement saying they were in moderate and light condition.

But the hospital said two of them were in serious condition and had to be sedated and put on ventilators at the ICU. The third injured soldier was admitted to the plastic surgery department.

"The IDF shares in the grief of the killed soldier's family and will continue accompanying the families of the injured," the IDF Spokesperson's Unit said.

The father of one of the soldiers who was lightly hurt said his son "called us from the ambulance at 2:30am. We realized something was wrong, but he calmed us down."

The father said the soldier was suffering from burns. "His condition is good, we experienced a big miracle. We saw he was smiling and laughing and that calmed us down. They only fell. they did what they needed to, but I don't know exactly what happened," he said.