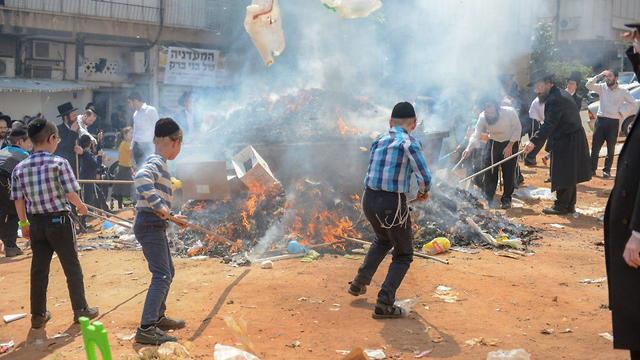 Thousands take to the roads to spend first night of eight-day holiday with family and friends; president and IDF chief of staff to attend Seder with lone soldiers

The start of the eight-day Passover holiday was being marked across Israel on Friday evening, as tens of thousands of people set out to share a Seder meal with family and friends. President Reuven Rivlin and IDF Chief of Staff Aviv Kochavi were to spend Seder night with 400 lone soldiers who have immigrated to Israel from 35 countries at the "Together for the Soldier" holiday village at Givat Olga. The president will depart for the meal from Beilinson Hospital in Petah Tikva, where his wife Nechama is hospitalized.

Jerusalem Municipality is preparing to host tens of thousands of people during the eight-day festival. As in previous years, the traditional priestly blessing will be held at the Western Wall.

In Tel Aviv, the municipality has helped arrange a number of public Seder meals, including Seders for the Ethiopian community, families, the elderly and the gay community. More than 3,000 people were expected to participate in these events.

In Ramat Gan, the department for Jewish culture has also organized a series of Seder meals. These meals were to be held in various Chabad centers and pensioners' clubs, among other locations.

The Israel Prison Service also planned for the Passover holiday, preparing festive meals for prison staff and 9,000 Jewish, Christian and Muslim prisoners throughout the country. Security prisoners will not participate in the holiday meal.

The security establishment bolstered its forces for the holiday, while traffic police were deployed to help ease the expected jams on the roads. Many people are also expected to take advantage of the clement weather to visit the country's nature reserves and parks on Saturday.

A general closure was imposed on the West Bank at midnight and the crossings to the Gaza Strip were also closed. The closures will end on April 27 at midnight, pending a security assessment.

The police have also raised their alert level and carried out situation assessments for various scenarios that could pose a threat to public order. Thousands of police and Border Police officers and volunteers will be deployed mainly around busy venues, entertainment complexes, holy sites, parks and beaches. The Magen David Adom rescue service also increased its numbers until the end of the holiday.

Some 100 prisoners were taught to conduct the Seder night services along with 20 volunteers. The IPS purchased tons of meat, poultry, fish, matzoh, eggs, charoset, horseradish and cookies for the holiday meal.